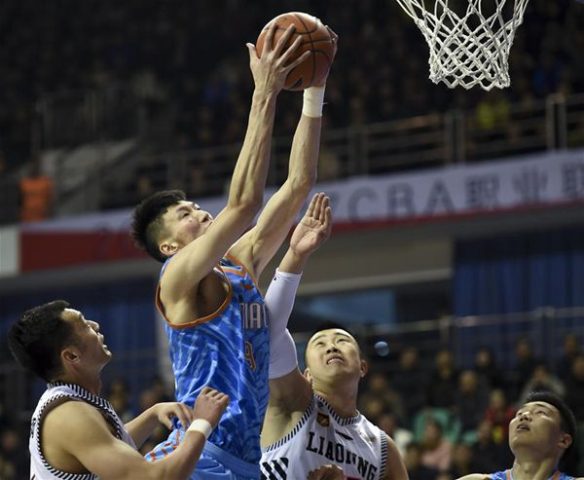 Xinjiang’s center Zhou Qi grabs a rebound in the game.

Liaoning defeated Xinjiang 106-100, ending its seven-game winning streak in the 30th round of the 2016-2017 Chinese Basketball Association (CBA) action on Sunday.

Liaoning, the runner-up of the last season of CBA action, established a ten-point lead at the beginning of the game, as Lian ming and Liu Zhixuan hit three three-pointers. Xinjiang narrowed the gap to five points when the first quarter ended.

Xinjiang launched a 10-0 run in the second quarter and turned the table. With help from Lester Hudson and Han Dejun, nicknamed as Kung Fu Panda, Liaoning got another nine-point advantage.

Committing too many turnovers, Xinjiang failed to cut the difference and still fell ten points in the third quarter.

Hudson helped Liaoning extend the lead to 15 points in the last quarter, after he pocketed his fifth three-pointer.

Having Andray Blatche on the court again, Xinjiang bridged the gap to six points, but they still lost the game as few time left.

“Our defense was fine, but our cooperation in attack was not good enough,” said Li Qiuping, coach of Xinjiang.

“We managed to control the rhythm of the game, and our defense on Darius Adams was successful,” said Guo Shiqiang, coach of Liaoning.

*RE: Afriyie Akoto stands no chance of winning at age 75 – Ben Ephson*

China Evacuates 4,400 in Liaoning Due to Floods

Italy Makes It Into Euro 2020 Quarter-Finals, Winning 2:1 Against Austria