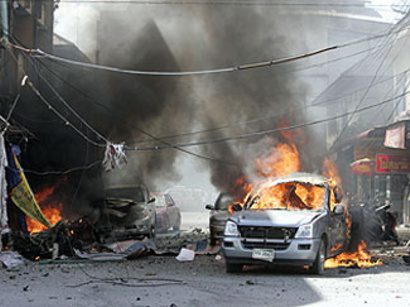 The death toll of the violent clashes between rival armed factions of Libya Dawn and Zintan forces in the town of Bir al-Ghanam increased to 26 on Thursday, according to military sources.

A source with Libya Dawn militias told Xinhua that nine of their fighters were killed and 13 others were injured.
Meanwhile, a military source with the internationally recognized government’s army told Xinhua that 17 members of Zintan forces were killed in the clashes, while four others were wounded.
The source of Libya Dawn said earlier that “a surprise attack was carried out by Zintan forces, specifically at the crossroads between the towns of Bir al-Ghanam and Zawiya where our troops are stationed.”
“More than 30 military vehicles backed by infantry fired heavily against our forces. And our troops responded strongly,” the source added.
Zintan forces, who are loyal to the Libyan national army, are engaged in heavy fightings in western Libya, particularly the outskirts of the towns Sabratha, El-Ajelat, and Zawiya, against militias of Libya Dawn since the armed Islamist coalition took over Tripoli in August 2014.
Libya has been witnessing frayed political process since the 2011 turmoil, which toppled its former leader Muammar Gaddafi, and it is now juggling two rival parliaments, the secular House of Representatives and the Islamist-backed General National Congress.
The Islamist militants and pro-secular Libyan national army have been vying for cities and towns for months, and fighting still flares near major cities like Benghazi and Tripoli. Enditem