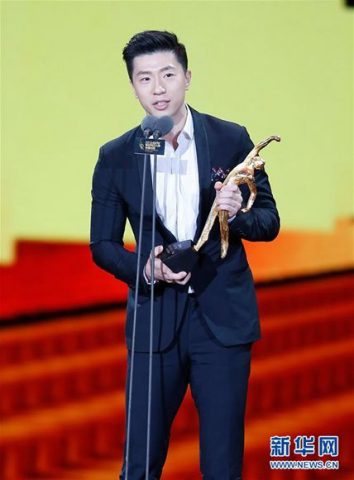 The Best Coach award went to volleyball legend Lang Ping, the first person to win the Olympic gold medal in the event both as coach and player. Her disciples, the Chinese national women’s volleball team, captured the Best Team award. Both Lang Ping and the team have won the awards for three consecutive years.

Nominated for the second straight year, Ma beat other four candidates, including Rio Olympics men’s 200-meter freestyle winner Sun Yang and badminton champion Chen Long, to claim his first Best Male Athlete award. He described the year of 2016 as “perfect” for him.

It was also Zhu’s second time to be nominated as the Best Female Athlete. The 22-year-old was the key player of the Chinese national team, and has been honoured the Most Valuable Player (MVP) of the women’s volleyball tournament at the Rio Olympics.

Playing for Vakifbank Club in Turkey, Zhu didn’t attend the ceremony, but made up a short video for the audience.

“The year of 2016 was full of happiness and unforgettable for me. I wanted to say thanks to our coach, our team and our fans. I will be better in 2017,” Zhu said in the video.