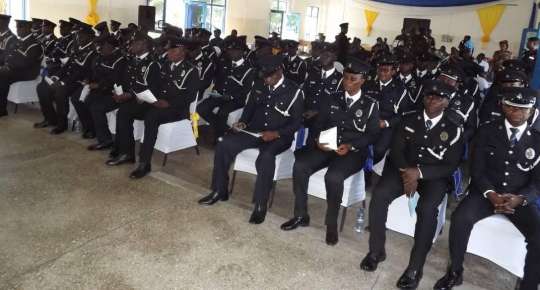 Police officers have been reminded to be professional in the performance of their job of keeping the society safe – should be even-handed, firm and to serve with integrity.

Commissioner of Police (COP) Akuribah Yaagy, Director-General of the National Patrol department, said they needed to uphold the tenets of democratic policing which required them to respect the human rights of everybody, including suspected criminals.

“It is generally known that most of our clients have the notion that, the Police have minimal respect for human rights of the citizenry and this has impacted negatively on our service delivery to the public.”

He said they must work to change that, to win back public trust and confidence.

COP Yaagy was speaking at the graduation ceremony held for 60 officers who underwent a five-week command training course at the Ghana Police Command and Staff College in Winneba.

He underlined the determination of the Police Administration to continue to train and build the capacity of its staff, to enable them to efficiently perform.

He told the graduating officers their training should positively impact the lives of others in the service – bring professional approach to crime fight.

The expectation was that they would act as change agents by mentoring, guiding and coaching their subordinates to avoid intimidation, human rights abuse, extortion.

The course was intended to bring change, innovation and to professionalize law enforcement services.
COP Yaagy encouraged them to keep upgrading their skills, to stay ahead of those who had chosen to live outside the law.

He urged them to strategize for the forthcoming District Level Election and the Referendum, to make the exercise peaceful.

The Reverend Oscar Kofi Amevenku, an Assistant Commissioner of Police and Acting Commander of the College, said the graduating officers, made up of three Police Superintendents and 57 Deputy Superintendents, were drawn from various police districts, divisions and units across the country.

Police on top of security situation in the country – Kwesi Ofori

We Must Recruit Properly Skilled Personnel For Prison Reforms – Judge

Suspected robber killed in a gun battle with police

Treason Trial: My greatest challenge is my profession – Witness