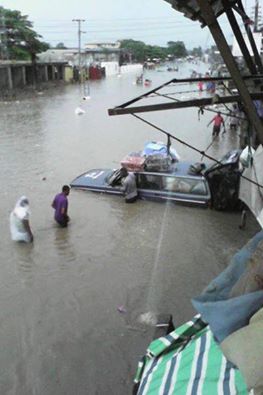 The rains are here again bringing to public glare the many mendacities of Governor Theodore Ahamefule Orji government of Abia State, concerning the once ubiquitous Ariaria International Market in Aba area of the state. The market has become a gloominess of itself losing its once allure of international presence. It has not only lost its international quality, but, to a large extent its local quality, as traders find it scratchy trading in the market anymore, due to surging flooding that covers the entire market when it rains, damaging goods and property worth millions of naira.

The dilapidated environment of the market is ever ready to pull down tears from even the eyes of a stonehearted person, except the governor. When this writer visited the market for first hand information, it was wailing and gnashing of teeth by not only the traders, but, also, those who came from far and near to buy one item or the other in the market.

It?s imperative to declare that the governor does not understand the importance of the market to Ndigbo and, the world at large. Therefore, he is bent on using multiple dishonesties in responding to the plight of the traders and buyers in the market.

The ghastly catastrophe of the government is that it has refused to eschew greed, self-centeredness. It does not do the right thing! There is no pliable roads in the market except those Nigerians have read in the newspapers that the state government has told the world that it has built in the market, which in reality does not correspond with the reality on ground.

It is all living jokes in and out of the market, unlike what the Governor Akpabios of Akwa Ibom State would have done using a matching contractor like Julius Berger to do a fantastic work in the market, if Ariaria were to be in Akwa Ibom State. Rather, all that Governor T.A Orji and his cluster of ballyhoos know about is to collect levies and taxes from the afflicted people in the market, without having anything to show for the victims? hard-earned money.Bottom of Form 3

In 2012, the Abia State Government through its now fired, barefaced and shamefaced Chief Press Secretary, Ugochukwu Emezue made bogus claims of how the government had prepared to revamp the market and, contracts amounting to millions of money awarded to contractors in making sure that the market enjoyed enabling environment.

But, all of that are today known as story that was dished out for the dogs.The Abia State Government had told the world through the garrulous Emezue thus: ?Definitely, the hallmark of this administration is sincerity of purpose. Anybody working for the state government is working towards one goal ? to take Abia State to the next level. This is something that has not been in place before.

?The economic importance of the Ariaria Market remains the fact that it is the place traders go to buy and sell and if you look at some of the things that are being done in Aba, you will discover that the Market has an overwhelming economic importance within the South East and by extension Nigeria…?

The state government through Emezue also had confirmed that the problem with the market is neither with the traders nor with the buyers, as it said: ?The traders here are skilled and have been providing employment for youths in the area. For us, that place is a hub of economic activities in the state…?

With what is happening in the market today in term of environmental decay, it is necessary to state that the Gov. T.A Orji government had lied through Emezue, saying: ?The state government is trying to make sure that whoever comes here (Ariaria Market) is comfortable and at the end of the day the state benefits?.

It is on record that this market which started its commercial activities in 1976 has not experienced the menace of environmental woes as it is experiencing in this government. It?s not the belief of the founders of the market that traders would be experiencing its current fate, which was what they suffered in a market its name was given as Aba Ikoha Market, which gutted fire enhancing traders to relocate to Ariaria.

With over 30, 000 stores, Ariaria now suffers congestion to its brim. The government hardly remembers that it had said through Emezue that ?When you have accessible roads it makes it possible for people to come this place to transact their businesses under a favourable condition. If the place is not accessible who will come to patronize your goods??

Apart from the gullies and flooding in the market, another heartbreaking side of findings is that many of the traders are gearing up to relocate to perceived favourable neighbouring states like Akwa Ibom, Cross Rivers, Rivers, even Cameroun. One trader told this writer that, ?Cameroonians were before major buyers of leather products, particularly shoes manufactured in the market, but they are no more again today, as the numbers of Cameroonians that come to the market are insignificant. If at all any still comes!?

It was renowned through a source that the government of Gov. T.A Orji had mapped out a sum supposedly to be in the tone of N50million and awarded the contract for the construction of seven internal roads in the market. Yet, there are drainage and road problems in the market, making the roads impenetrable as the rains are here.

Not even a committee that was set up by the Abia State Government through the State Ministry of Commerce has lived up to the expectation of manning the roads and drainages in the market. The management board seemingly headed by one Chief Francis Duru assigned with the work of ?collecting revenues accruable to the market for the purposes of maintaining standard there? was unable to ?bring about a turnaround in the physical development, revenue generation and standardization of the Market in no distant time.?

Duru reportedly had said when his committee was assigned with the job that, he was very happy with the governor of the state. Duru had also believed that with the government supposedly handing over the leadership of the market to the traders of the market, there would be improvement in the infrastructure reconstruction, rehabilitation and reformation of the market.

He apparently had said: ?My government will buy three compressor tractors that will be in charge of refuse disposal, three tippers that will be going round the market to collect refuse so as to ensure that the market remains clean at all times.

?We have started the scooping of all the gutters and drainages and I believe that by the time we finish the construction of the roads, this market will regain its lost glory in the state and beyond. I will specially thank the Governor because of the timely intervention on the issue of road in the market…?