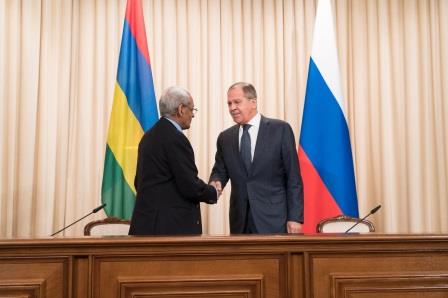 In an attempt to strengthen economic cooperation and diplomatic ties between Russia and Mauritius, the Mauritius, Minister of Foreign Affairs, Regional Integration and International Trade, Seetanah Lutchmeenaraido, has held talks with his Russian counterpart Sergey Lavrov.

On their first working day, of the four day meeting, both foreign ministers stressed the high level of traditional friendly relations between their two countries and confirmed the mutual understanding of Moscow and Port Louis on stepping up political dialogue, building mutually-beneficial cooperation in trade, economic, investment, and promoting long-term partnership in high technology, transport, fishing and tourism.

Lutchmeenaraido told both the local and foreign media that there were good prospects in the economic sphere.

“We have found projects suitable for implementation in areas such as information technology, power generation, maritime transport, fishing and infrastructure and have agreed that the governments of Russia and Mauritius will assist business circles in establishing mutually beneficial direct contacts,” he said.

Later, the delegation attended the business forum that was organised jointly by the Council for investments of the Republic of Mauritius and Russian Chamber of Industry and Commerce. The Russian-Mauritian economic and trade cooperation and development cooperation to establish business contacts with the African continent were discussed at a bilateral business forum.

The Russian Chamber of Industry and Commerce Vice-President, Vladimir Padalko, in his speech noted that “Mauritius is a promising partner for the Russian business.”

It is a country with dynamically growing economy, high living standards and favorable conditions for doing business. The World Bank report in 2016, said Mauritius occupied the first place among African countries South of the Sahara on the business climate.

However, he also stressed that entrepreneurs of both countries did not yet have sufficient knowledge about the current capabilities of each other, as evidenced by the low volume of mutual trade.

Of particular interest among the conference participants was the presentation by Dmitry Suchkov, Executive Secretary of the Coordinating Committee on Economic Cooperation with African countries south of Saharan Africa (Afrocom) which was created under the auspices of the Russian Chamber of Industry and Commerce.

He not only discussed about the structure and various activities of the Committee, but also shared with the audience, his vision of the development of interaction with the African continent.

Afrocom, in his opinion, can also be used as the bridge for establishing contacts with Mauritian business and other regions of Africa.
GNA/Newsghana.com.gh