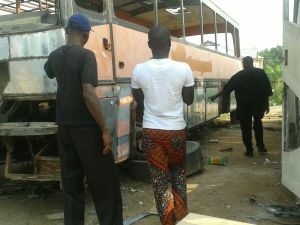 The union leaders found this bus at a workshop at Oduman on the Kumasi-Techiman road.

A syndicate at Metro Mass Transit Limited (MMTL), a public transportation company, is alleged to have stolen 12 buses belonging to the company.

The syndicate is said to have towed the buses from various MMTL depots in the regions to unknown?locations.

MMTL workers, who started wearing red bands on Monday, have given management and the board up to the end of this week to produce the stolen buses or they will ground all the company?s buses by Monday, December 22, thereby shutting down operations.

The union leaders alleged that the syndicate, headed by some senior management members, was spraying the buses and operating them as privately owned buses.

They produced photos of two MMTL buses found in two different workshops in the Ashanti Region, through their own investigations, which were being sprayed.

The union leaders explained that their checks from various depots indicate that the buses were towed away contrary to company policy, which states that all buses auctioned as scrap should be cut into pieces in the company?s premises before being transported.

The towing of the buses aroused their suspicion and they demanded explanation from management, which never came.

Consequently, the union leaders sent messages to all staff to help locate the 12 buses towed away. And lo and behold, two of the buses were found at different workshops in the Ashanti Region.

Each MMTL bus has a unique identification number embossed on it, and according to the union leaders, a bus with an embossed number 2085 was found at a workshop at Oduman on the Kumasi-Techiman road.

The union leaders also found another bus with embossed number 2050 at Kumasi Magazine three weeks ago, which they say has now been dismantled.

At both workshops, minor repair works were being carried out and the colour of the buses changed.

The union leaders alleged that information reaching them indicates that three of the buses have been converted and were working for individuals.

On November 10, the unions presented a resolution to management to investigate the matter and punish individuals involved.

The workers also accused the Entity Tender Committee, which they alleged was being manipulated by certain individuals, of complicity in the grounding of over 80 buses.

The union leaders said the Entity Tender Committee has failed to act on request for simple spare parts like brake pad, resulting in the grounding of the buses, especially at a time when passenger flow is on the rise due to the Christmas season.

The leaders said they were forced to take drastic action because after a meeting with Transport Minister on November 20 to address disunity among top management and the board, some members of the board and management, who they alleged were working to unseat the Managing Director for their selfish interest, leaked a letter to the media in an attempt to paint the MD black.

The union leaders told?The Finder?that they presented the resolution to management, but it was never acted upon, and it took the MD to return from leave to constitute a committee to investigate it.

The union leaders want persons in management and on the board who are frustrating the efforts of the MD to be removed.

They warned that after investigations, persons found guilty of being behind the stolen buses must be punished according to the laws of the land, adding that the workers cannot work with such people.

Shanghai fuels buses with biodiesel made from ‘gutter oil’