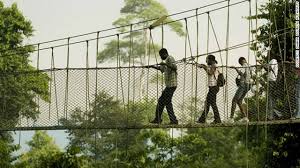 The new Minister of Environment and Tourism, Pohamba Shifeta said Namibia should increase the frequency of its flights to Europe and North America if it is to meet its target of 2 million tourists annually.

The Ministry of Environment and Tourism has mapped a five-year strategic plan to reach 2 million tourists from the recent record of 1.3 million tourists.
Shifeta said in a statement reaching Xinhua Sunday North America, China, Russia, the United Arab Emirates and southern African states have been identified as emerging tourism markets and plans are being formulated to attract visitors from these countries to Namibia.
In 2013, according to the Namibia Tourism Board (NTB) a record 1.3 million tourists visited Namibia, a country that is rugged and yet is endowed with a staggering array of fauna and flora and is home to black and white rhino, elephants, lions, zebras, buffalos, leopards, giraffes and many other animals.
Shifeta said Air Namibia is collaborating with other airlines to increase connectivity.
He said it is possible to reach the 2 million target, because Namibia has opened new markets namely North America and the Asian market a new trend to move away from a one-dimensional market that relied heavily on the European market.
“We are getting more visitors from there. Our tourists traditionally are mostly from Europe, we are trying to work with our stakeholders in Europe and North America, but the problem is we are handicapped by people travelling to get here. The flight inflow is very low,” said the minister.
The national carrier Air Namibia currently only flies to Frankfurt.
“We also have Lufthansa but it will be good to have a condor. And we hope if we can have more inflow of flights from Europe and connect flights coming from North America because Air Namibia is small. South Africa have put strict measures on visas requirements and it has cut and affected our tourist arrivals. Most of our travel arrivals come from South Africa and only few come directly to Namibia,” Shifeta told media.
Shifeta said there is need to train immigration officials at entry points around the country to be customer friendlier when they welcome visitors because the first created when tourists visit the country last and when tourists are treated in an unfriendly manner this will last in their memories for a long time.
Tourism in Namibia is a major industry and on average it contributes 7.2 billion Namibian dollars (600 million U.S dollars) to the country’s gross domestic product (GDP). Namibia is among the prime tourism destinations in Africa with roughly one in three tourists coming from South Africa. Namibia is known for ecotourism because of its extensive wildlife.
In 2015, Lonely Planet named Namibia the 2nd best tourism destination in the world in terms of value. Enditem