President John Dramani Mahama says the road sector has seen massive investments in the history of the country during his tenure. 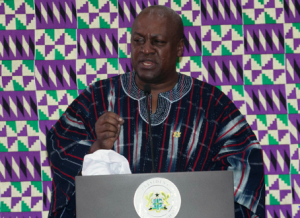 He said his vision was to finish off road projects such as Achimota-Ofankor, Awoshie-Pokuase, Sofo line and the Tetteh Quarshie- Adenta among others.

In his final state of the nation address in Parliament, President Mahama recounted that during his tenure, “We also commenced and completed the Kwame Nkrumah Interchange, fast tracked the construction and opening of the Kasoa overhead bridge, completed the Airport hills/Burma Camp network of roads and completed the 37- El Wak-Trade fair road.”

He recalled that there were widespread of dissatisfaction with the road network in the country pointing out that “Complaints covered poor state of urban roads, feeder roads and highways. Many hours sitting in traffic caused frustration and discomfort for urban commuters.”

The President said poor feeder roads and pothole-riddled highways increased maintenance cost for drivers and this in-turn has led to increased fares and transport charges for goods.

These notwithstanding, President Mahama said his government invested more resources in continuing the Eastern corridor road project, asphalt overlay of roads in Regional and District capitals and massive investments in cocoa roads across the country have opened up our country significantly.

“Many other projects are ongoing such as the Tema motorway roundabout decongestion project and a new bridge from flower pot roundabout on the Spintex Road over the Accra- Tema motorway into East Legon. There are others ready to commence with financing arranged such as the Obetsebi Lamptey interchange, the Pokuase interchange, and Motorway expansion project among others,” added.

He said the improved airport infrastructure has also increased both domestic and international travels.

“The Terminal 3 project at the Kotoka international Airport is progressing fast and would make Accra the most favoured aviation destination in West Africa.

Already, the completed rehabilitation of the arrival hall in terminal two (2) has created better comfort for passengers using Accra’s airport.”

President Mahama said the Kumasi and Tamale Airport expansion will also witness increased passenger movements adding, Wa and Ho were advancing steadily and would soon be open to commercial travel.

“Urban rail systems like the Sekondi-Kojokrom-Takoradi line will ease the inconvenience of commuters in the twin city.

The Tema-Akosombo line will soon start to maximize the use of the Volta Lake Transport Company for moving cargo for land-locked Sahel countries, upriver to Buipe in the Northern Region, the President said.

He said work on the expansion of the country’s two maritime ports at Takoradi and Tema were ongoing and when completed it would lead to faster turn-around times for ships and larger cargo volumes and bulk cargo handling will also be more efficient.