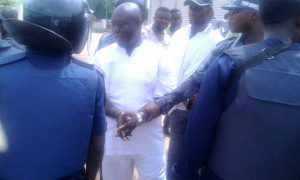 Maxwell Kofi Jumah in handcuffs after his arrest on Saturday

Incumbent Member of Parliament for Asokwa, Patricia Appiagyei, has been retained as the New Patriotic Party parliamentary candidate for the 2016 elections.

Maxwell Kofi Jumah, a former MP for the Asokwa who strangely returned to contest after he had been beaten by the same opponent previously, found himself behind bars whiles voting was underway.

He was thus declared loser whiles languishing in cells after he stormed the voting venue on Saturday and tore a portion of the voters? register with the claim that it had been doctored to favour his female opponent.

The incident, led to a suspension of voting for a period as the Ashanti Regional Chairman, Antwi Boasiako made an effort to restore calm. He also made an attempt to secure bail for Mr. Kofi Jumah, who was handcuffed from the voting venue and taken away by the police buffalo unit in Kumasi.

Loyalists to Mr. Jumah were angered by the incident with some of them boycotting the voting.

Voting still went ahead despite the minor damage caused to the voters? register.

Maxwell Kofi Jumah has lost the chance to contest the seat for the NPP in 2016 and sadly languishes behind bars.

TV3?s Ashanti Regional Correspondent, Williams Evans Nkum, says the police are expecting officials of the Electoral Commission to sign a statement at the station before a bail could be granted to the former MP.