The media have told the High Court in Pretoria that they have reached an agreement with the National Prosecuting Authority (NPA) on how to broadcast the murder trial of South African sprint runner Oscar Pistorius. 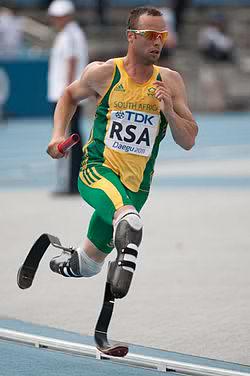 Several media houses including MultiChoice, Eye Witness News (EWN) approached the court seeking permission to broadcast live and take pictures in court for the duration of the trial, which starts on?3 March 2014 until 20 March 2014.

Media houses want to broadcast an audio feed of all the proceedings as well as televise all arguments, judgment and testimony of expert witnesses.

George Mazarakis, executive editor of “The Oscar Pistorius Trial Channel”, says after months of negotiations, they have reached an understanding with the National Prosecuting Authority.

PARALYMPIC superstar Oscar Pistorius, also known as “The Blade Runner” has stated that TV broadcast could limit him in giving testimony.

Pistorious advocate Barry Roux also argues that witnesses could be reluctant to admit their mistakes when testifying, if doing so in front of cameras.

Roux said: “We must be careful not to run a criminal and media trial simultaneously.”

“Why can’t this be like other trials? Why is this special? Because he ran fast around a track?”

Roux say Live TV, audio opens up “a winning recipe for an unfair trial. Reeva’s parents, state and defence witnesses all say video and audio coverage will inhibit them.”

A 9mm pistol was recovered from the hours after police were called about?3am.

“There were three gunshots and a woman’s screams. Almost ten minutes later there were three more shots,” the wife of a neighbour who rushed to the scene reportedly said.
?

While ?Oscar Pistorius claims it was an accident, the state will argue it was a case of murder.

At the 2011 World Championships in Athletics, Pistorius became the first amputee to win an able-bodied world track medal. At the 2012 Summer Paralympics, Pistorius won gold medals in the men’s 400?metre race and in the 4?נ100?metres relay, setting world records in both events.