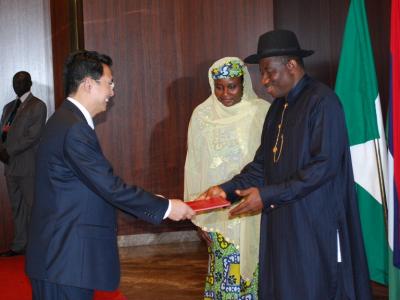 President Goodluck Jonathan on Monday applauded the growing bilateral relations between Nigeria and China, which he said, had resulted in a phenomenal increase in trade between both countries.

Jonathan gave the applaud at an audience with China?s outgoing ambassador to Nigeria, Denq Boqing.

The president expressed the hope that the mutually-beneficial bilateral relations would be further enhanced in coming years.

Jonathan noted that one-third of the volume of trade between Africa and China currently takes place with Nigeria.

He commended China?s support for the rehabilitation of Nigeria?s transportation infrastructure.

The president also thanked the Chinese government for the development of the nation’s water and power sectors.

He called for greater investment from China in Nigeria?s agricultural sector and other sectors where Chinese expertise could help to develop Nigeria?s potential.

The president praised the outgoing ambassador for working hard to boost trade and economic relations between both countries during his tenure in Nigeria.

Boqing, who served in Nigeria for three years, said that his most fulfilling assignment was facilitating Jonathan?s State Visit to China in 2013.

He assured the president that he would continue to work for the expansion of the cordial relations between China and Nigeria wherever he finds himself.