More than 700 boys aged 10 and above in the Zambezi region have been circumcised under a national voluntary medical male circumcision campaign launched by health authorities, said Martin Likando, health officer at the Zambezi Regional Health Directorate, 1,000 kilometers from Namibian capital, Windhoek.

“This was achieved during the school holiday voluntary medical male circumcision outreach program we conducted,” said Likando on Wednesday.

Records of the Ministry of Health and Social Services shows that in 2014, the Zambezi region has the highest HIV prevalent rate of 23.7 percent, which represents about 45,000 infected with the virus. About 215,000 people in Namibia are infected with HIV.

According to Likando, a variety of interventions including Voluntary Medical Male Circumcision has contributed to a significant reduction of infections.

“We therefore plan to reach out to as many men as possible and circumcise 3,000 men in the region as studies by the World Health Organization has shown that circumcision reduces the risk of HIV infection by 60 percent.,” he said.

Meanwhile, the countrywide Voluntary Medical Male Circumcision campaign targets to have 20,000 men circumcised this year alone. This is in addition to a figure of 16,341 men circumcised since May 2014. Enditem 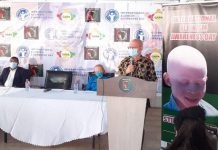