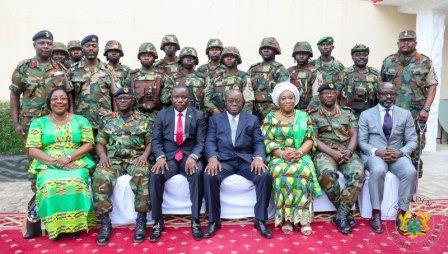 President Nana Addo Dankwa Akufo-Addo on Saturday stated that all military personnel and members of the country’s security services embarking on peacekeeping missions would henceforth receive their allowances, whilst on duty tour. 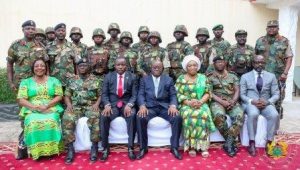 He said the situation which existed before his administration, where soldiers were paid their peacekeeping allowances, sometimes months after arriving in Ghana, would not be a feature of his government.

“We will make it a principle that wherever the peacekeeping operation is, the peacekeepers will be paid there. That is the principle, and we are not going to go back on that”, he said.

The President made this known when he interacted with the 210 Ghanaian peacekeeping troops stationed in The Gambia, who are part of ECOWAS’ mission to that country.

He was in The Gambia for the inauguration ceremony of President Adama Barrow and the 52nd Independence Day celebration of The Gambia.

President Akufo-Addo recounted how, in the run-up to the 2016 election, he indicated publicly that “in our view, those who go on peace keeping operations should be paid where they are and not when they come back to Accra”.

In fulfillment of this pledge, he told the soldiers that “as it is now, the monies that are due to you for the first half of the operation, which is up to the 20th of February, have been released to you. The fifty soldiers who are to remain here for the next three months will also have what is due you released. All of you going back to Ghana on Monday will be paid in full before you leave here (Gambia)”.

This announcement by the President drew spontaneous bouts of applause and appreciation from the soldiers gathered, who described it as a feat never witnessed in the history of the Ghana Armed Forces.

The President revealed that upon his assumption of office, “I was told about the arrears on peacekeeping operations owed to soldiers. I decided to do something about it … and I ordered the release of $13 million to cater for the arrears”.

This decision, he explained, was to ensure that the morale of soldiers were boosted, and to serve as an indication of his commitment to the welfare of the Ghana Armed Forces.

With the mission to The Gambia being the first decision he had to take as President and Commander-in-Chief, President Akufo-Addo indicated that “when ECOWAS makes commitments, I believe that as good members, and members in good standing, we are required to honour those commitments”.

He noted that after consultation with the hierarchy of the Ghana Armed Forces, he decided that the request from ECOWAS for Ghana to contribute 210 soldiers to the mission in the Gambia was a good request, because it bordered on the peace and stability of a member country of ECOWAS.

“I am happy I did so because the contribution that you have made to restoring peace, security and democracy in The Gambia is an exceptionally strong one. And, I am here to congratulate you on the work that you have done for ECOWAS and for Ghana.

“You have lifted the flag of our country high and you deserve all the praises that you are getting from the population and from everybody else,” he said.

The President said: “Everyone I have interacted with here is telling me how professional you have been, how well-disciplined you have been, and how very thorough you have been in your work. As your Commander-in-Chief, I am very happy to hear about this report.”

President Akufo-Addo noted that the he was not so surprised about the good views he received about the conduct of the Ghanaian troops in The Gambia.

“To some extent I am not surprised, because when I was Foreign Minister, some 10 years ago, one of the things that consistently buoyed up my position and gave me strength was the performance of Ghana’s Armed Forces in peacekeeping operations.

“Everywhere I went in the world, it was one of the first things my colleague Foreign Ministers will tell me – ‘your soldiers are very professional, they are doing a good job’. Whether it was Cote d’Ivoire, Liberia, Somalia, wherever it was, the reports of how good Ghanaian soldiers are were all the same,” he added.