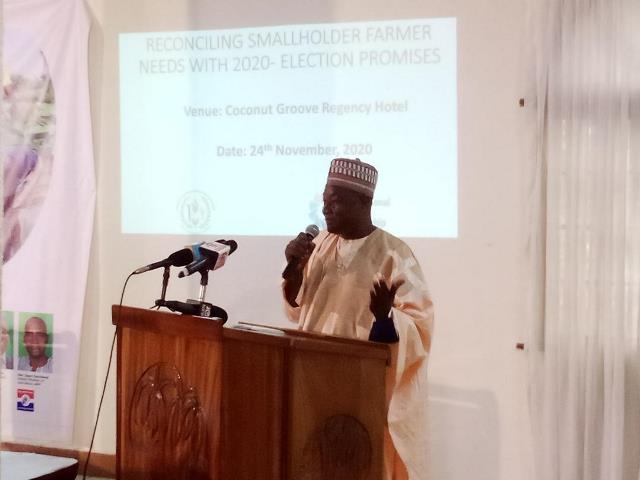 He said the Agricultural sector could only be sustained “if there is peace in the country before, during and after the elections”.

He said this at the “Agriculture Manifesto Forum” held in Accra to discuss the New Patriotic Party’s (NPP) and National Democratic Congress’ (NDC) agriculture manifestos, share perspectives and expectations for the sector.

He said the forum was to help farmers gain firsthand knowledge of what the two main Parties manifestos had for the sector to make an informed decision come December 7.

“Gone were those days where people voted without knowing what they had voted for,” he said.

He said the small farm holders need support from the government to improve on their farms and increase productivity because all citizens depend on food to survive.

He said the party which would come to power after the elections should attend to their needs and not classify them as being aligned with one political party or the other.

He said about 50 per cent of perishable crops and 20 per cent of cereals were lost due to these challenges faced.

He said SHF owners such as women and startups were not able to access funding from banks and financial institutions to grow their farms.

He said the sector should be subsidized adequately to improve its contribution to the nation’s economy.

He said about 50 modern warehouses were near completion across the country to aid in solving challenges with post-harvest loses.

He said the government had engaged about 2,700 extension officers to guide farmers implement good farming practices to sustain the sector.

Mr Harry Yamson, Spokesperson for Agriculture, NDC speaking on the party’s manifestos policy on Agriculture said they would empower women and youth in the agriculture sector.

He said the Party would add 40 per cent value to agriculture produce to make farmers more competitive in the local and international market.

He said the party when voted into power would involve more private partnership into the sector to improve irrigation across the country to increase yields.