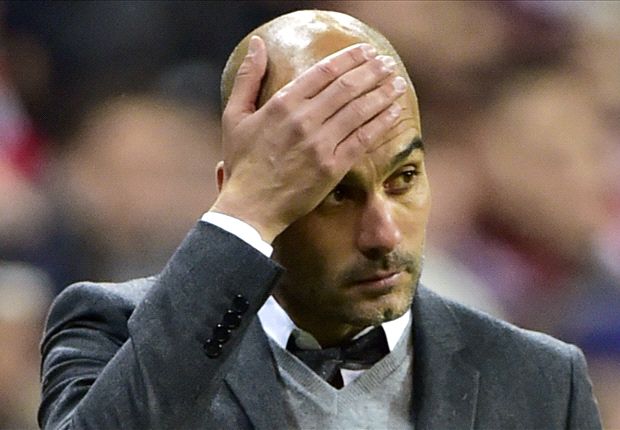 Manchester City are bringing in Pep Guardiola to move the club forward but they’ve gone just as far in the Champions League this year with plain old Manuel Pellegrini in charge and might yet go further.

What has been proven now three times in a row is that Guardiola’s football is no longer winning football at the sharp end of continental competition.

That honour goes to Diego Simeone and his fearless Atletico Madrid. His is the team who beat treble-winning Barcelona and who have now accounted for Bayern. And how? By keeping it tight and hustling for a goal on the break. There’s your philosophy.

Guardiola’s teams have been defeated in the same way in each of his three consecutive semi-final failures at Bayern Munich. No away goal at Santiago Bernabeu. No away goal at Camp Nou. No away goal at Vicente Calderon. All the return legs featured away goals given away cheaply to the Spanish sides, striking like daggers through the heart at the Allianz Arena. Every year, over and over and over again. Knockout football is capricious, no mistaking that. However, three similar semi-final eliminations put together in a row look less like one-offs and more like a pattern.

Sure, there were key moments against Atletico. The Thomas Muller penalty could have made it 2-0 and who knows what might have happened from there. In any case, Diego Simeone’s side would still have needed only the one goal they eventually got. There was a late flurry but it was never going to be enough. Bayern were essentially asking Atleti to do what they do best; hang in there for full time.

Credit where it’s due. Guardiola is about to lead Bayern Munich to a third straight Bundesliga title under his watch. It is a startling achievement to win three titles on the bounce in a new country. That success covers the period from the day he settled in to the day he will leave. Guardiola knows only success in Germany.

The fact of the matter though is that’s what it feels like for plenty of coaches down throughout Bayern’s history. They’ve won roughly one out of every two Bundesliga titles since the inception of the competition in 1963. They have never endured a stretch of more than five seasons without winning the German title. This will be their fourth title in a row and their 25th league crown overall. This is normality. The world is on its axis when Bayern Munich are champions of Germany.

Economically now as well as on the field, nobody can match them. CEO Karl-Heinz Rummenigge has presided over a phase of Bayern’s history since his appointment in 2002 that could well be described as total takeover. It’s got to the stage that Rummenigge is not looking to Germany for challenges to but to Europe and the world.

He plainly sees his team as having outgrown the Bundesliga. The former striker is zealous in his vision for a Super League in which to field his super club alongside the likes of Real Madrid, Barcelona and Paris St-Germain. Well maybe they are not quite ready for that step. Let’s deal with Atletico first.

Bayern’s closest domestic rivals, Borussia Dortmund, cannot seem to stop their best players leaving for Bavaria. As evidenced by the acquisitions of Mario Gotze, Robert Lewandowski and, imminently, Mats Hummels, the mechanisms in place at Bayern are designed not only for them to succeed but for the rest of the Bundesliga to fail.

It is like when Mark Zuckerberg perceives Instagram or WhatsApp to be a threat to his Facebook kingdom. The answer? Buy them. The only problem for Bayern is keeping all their star players happy at once.

Hence, to win the league, or even the double, is no longer enough. When clubs move in these rarefied circles, they are judged on a totally different basis. Look at Laurent Blanc at Paris St-Germain. He is unsure of his job after going out of the Champions League to Manchester City. That he is going for consecutive domestic trebles in France is of no great importance. The Qataris have not poured billions of euros in to win the Coupe de la Ligue.

What counts is the Champions League. But Guardiola and Bayern have been eliminated at the semi-final stage three seasons running and he’ll never get another chance to put it right. Three domestic titles weighed up against three continental semi-final eliminations – which is a better assessment of Guardiola’s tenure at a club like Bayern?

It’s been three years and six legs of Champions League semi-final failure. This is not a judgement based on one match or moment.

While plenty can and should be said about the evolution of the current Bayern players under Guardiola, what legacy will he leave behind? Carlo Ancelotti will be along next season and he won’t impose Guardiola’s style on the team. In fact he won’t bring a pre-defined template at all. He’ll look at the players, take them as he sees them and pick a team accordingly.

Bayern thought they were hiring the man to give them a unique, definable way of playing for a generation or more and the continental esteem to go along with it. They didn’t get that. It cannot be said that Pep remade Bayern. He wasn’t there long enough. Pep needed the Champions League.