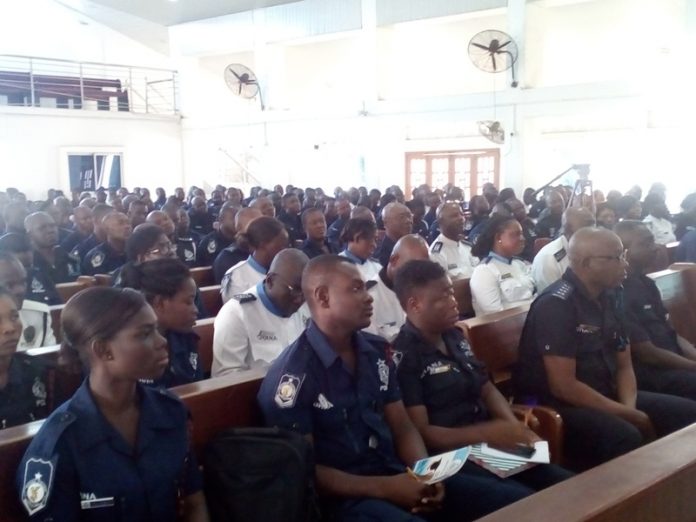 DCOP Maxwell Atingane, Director General in charge of Motor Traffic and Transport Department (MTTD) of the Police Service has warned personnel to be professional, saying the department is not an avenue for getting quick money by indulging in unethical acts.

DCOP Atingane said the police administration would be vigilant and keep a close eye on any personnel found in any act of unprofessionalism and would be dealt with according to the law, since such unhealthy practices affect the image of the Service.

He gave the warning in Accra on Monday at the opening of a training programme for the restructuring of MTTD.

The one-week orientation programme brought together 390 personnel from Accra as part of the service quests to build their capacity and help them to discharge their duties in an effective and efficient manner.

The Director General said the programme was also a means of providing the relevant human potential to effect the desired changes envisaged by the Inspector General of Police to transform the service through a comprehensive reform strategy.

He said discipline was the hallmark of the service, stressing that the traffic police were the eye of the police service, hence the need to be more professional in the course of performing their legitimate functions to meet the demands of the public.

DCOP Atingane announced that every MTTD personnel must be seen in their traditional dress, that is the white tunic, comeo and the black trousers as an identity of traffic officers among others and allow the personnel to be seen by motorists in the course of duty.

“It also enhances conspicuity in the event of poor visibility,” he added.

DCOP Atingane said the police administration was in the process of procuring the right tools and accoutrement for use by the personnel to match international standards.

He urged participants to make good use of the training course to enhance performance, saying it was the expectation that the theoretical and practical aspects of the programme would increase their knowledge to enforce traffic rules and regulations accordingly.

Participants will be taken through topics such as Ethics, Integrity and Professionalism of Traffic Police officers, Traffic Enforcement Accident, Investigation Measurement and Interpretation, Overview of Road Safety Problem, How to build Accident Case Docket among others.

We can improve food security through home gardening – Director

Huge progress being made in fish production in Bono Region

Children must not be justification for remaining in abusive marriages – Director

Ghana has no Genetic Programmes to Diagnose Rare Diseases