President Nana Addo Dankwa Akufo-Addo, Tuesday, delivering his maiden State-of-the-Nation Address , painted a gloomy picture of the national economy and called for consensus building towards cutting out corruption and economic prosperity for the wellbeing of all citizens. 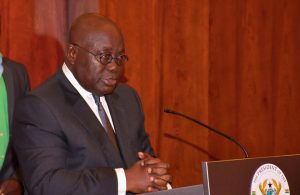 He said the Government would take tough, prudent and innovative policies and reforms that would restore fiscal discipline and sustainable economic growth; and called for cooperation towards achieving the Ghanaian dream.

On the current economic situation, the President mentioned high rising public debt, high fiscal deficit, low economic growth, high rate of unemployment, high electricity tariffs and high non-performing loans, among others, as symptoms of the deeper structural problems, which he said, required a range of reforms and policies, to reverse.

The President explained: “Six weeks after taking office, it is unfortunate to state that our worst fears have been confirmed plus a few unpleasant surprises, as well…”.

The country’s debt stock, he said, stood at 122 billion cedis, which was about 74 per cent of Gross Domestic Product (GDP) at the end of 2016.

The President, who prevailed against the intermittent heckling from the Minority side in Parliament, however, said the overwhelming majority of Ghanaians did not elect him to complaint about the dwindling economy, but to fix it.

‘‘I was elected to fix what was broken and my government and I are determined to do just that’’.

Consequently, the Minister for Finance, would at the beginning of March, be in the House to lay out the road map to take the economy from its current predicament and sustainable path to recovery, he said.

“The Government has the programme, competence, and the goodwill of the people to turn things around; By the grace of God, we will succeed,’’ he assured.

President Akufo-Addo said it was imperative to boost confidence in the economy for increased private sector investments and productivity; therefore, his Government would undertake the requisite institutional reforms to create an enabling environment for Ghanaian entrepreneurs to rise and thrive both domestically and internationally.

‘‘The government will maintain a stable macro-economy, institute measures to reduce the interest rate, the reduction of tax burden on enterprises, provision of affordable and reliable electricity, setting up of stimulus package for existing Ghanaian industries to improve their competitiveness as well as implementation of public-private partnerships, ‘’he assured.

He said the Government would also create employment avenues that would be anchored on agriculture through the provision of improved seedlings; fertilisers, dedicated extension services; all-year irrigation; processing and industrialisation.

The Address was in fulfillment of Article 67 of the 1992 Constitution which stipulates that the President must give the State of the Nation at the beginning of each session of Parliament and before the dissolution of Parliament.