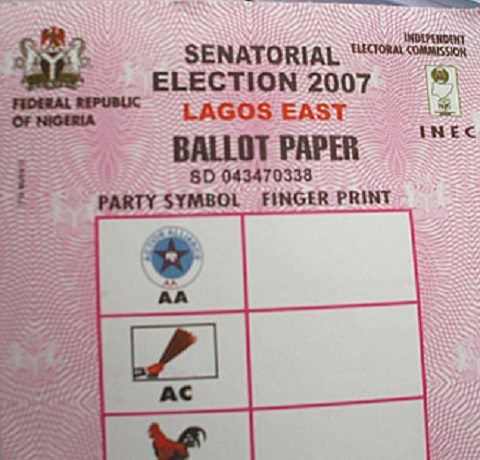 Determined to get to the root of the double contract for the 2007 Presidential Election ballot papers in April 2007, the House of Representatives has revealed that those involved in the transactions would be invited to give clarifications.

Dropping the hint with National Assembly correspondents on Monday in Abuja, Hon. Solomon Olamilekan, chairman of the Public Accounts Committee (PAC), alleged that there was fraud in the N1.15 billion contract that was awarded from the Service Wide Votes (SWV) for the printing of the 2007 Presidential Election ballot papers in April 2007 by the Federal Government.

Olamilekan further hinted that records available to his committee from the Office of the Accountant General of the Federation revealed that there are elements of double transactions.

Speaking at a sitting of the committee, Olamilekan consequently invited the Central Bank of Nigeria (CBN), Ministry of Finance, Nigerian High Commission in South Africa and the permanent secretary, State House to appear before the committee latest April 26, 2014.

Olamilekan, who alleged that CBN transferred the sum of N1.15 billion to the Nigerian High Commission in South Africa for the printing of presidential ballot papers on April 17, 2007, added that a South African company was contracted to produce 65 million ballot papers at the unit cost of N16 each.

?There was a memo from the chief of staff to the President to the Accountant General of the Federation to cause the issue of N1.15 billion from the Service Wide Votes. But I can tell you that there were two cheques from the State House sent to the CBN for the same purpose (N1.15 billion). So we don?t know how much was actually collected. How many times was the contract paid for?

?We are, therefore, inviting these agencies to come and show us evidence of correspondence ? how many ballot papers were printed, and at what cost. We would like to see the contractual agreement. We want clarification concerning the cheques that was raised for N1.15 billion, which gave room for double transaction,? Olamilekan.

It would be recalled that, after his earlier disqualification by the Independent National Electoral Commission (INEC), following an administrative panel of inquiry that indicted him of corruption, the Supreme Court had on April 16, 2007, in a unanimous judgment ruled that the then Vice President, Alhaji Atiku Abubakar, was free to contest the presidential election on April 21, 2007.

The court ruled that INEC had no legal power to disqualify the presidential flag bearer of the then Action Congress (AC).

It was alleged that the contract was awarded to Lithotech, part of Bidvest Group of South Africa.