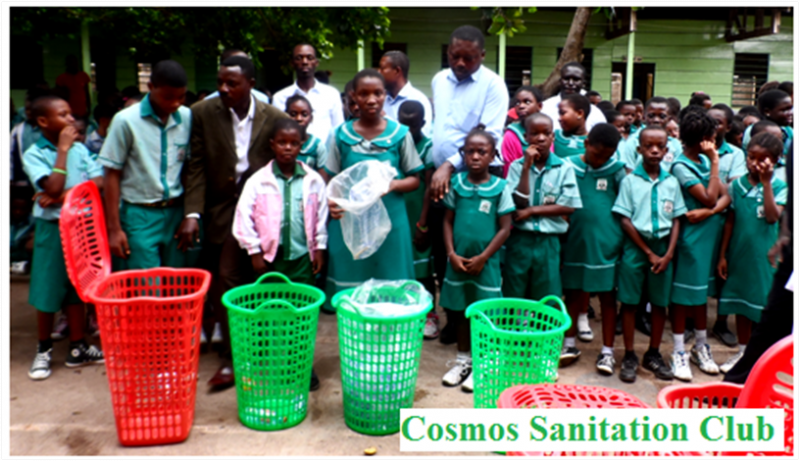 Cosmos Schools Ltd, a private school located at Lapaz, New Mkt, Accra, launched a sanitation club at the school premises on Monday 7 July. The club is made up of 60 pupils and a 9-member committee headed by a patron Mr Henry Quaye.

At the launch; Mr Quaye, also the headteacher for the lower primary section, said that the main objective of the club is to inculcate in pupils the habit of dropping litter in designated containers. A total of 20 specially designed litter containers were purchased by the Management of the school to start the club, said Mr Quaye. He further explained that the litter bins are clearly labelled to hold plastics and paper pieces: the red containers for plastics and green for paper pieces.

Ask why the school launched a sanitation club for kids, Mr Quaye explained that pupils readily acquire good manners than adults do. Thus, if they (the pupils) learn and become used to dropping litter in containers, our cities will not be converted into refuse dumps as we are currently experiencing, he lamented.

Asked how the kids are going to manage the rubbish amid health risk, the PRO of the club, Mr Iddrisu Abdulai, explained that the bins are placed at vantage points all over the school spacious compound; this distribution enables pupils to walk less than 15 m to drop an empty sachet after drinking the water from it. He added that pupils are provided with disposable hand gloves and mouthguards which are worn anytime the contents of the bins are to be transferred into the large transparent polybags normally used by the buyers of the plastic waste. All such activities, he said, are strictly supervised by the teachers.

The PRO further added that separating the waste into paper pieces and plastics at the disposal points facilitates recycling; the pieces of paper are going to T-roll manufacturing companies, while the plastics to ?pure water sachet? buyers. Any other organic waste including leaves from trees are to be incinerated, he mentioned. Accordingly, the school with over 1600 pupils in all the four sections namely preschool, primary, JHS and SHS generates no refuse again.

The PRO thanked the Management of the school for providing the funding. He appealed to Management again to make funds available to enable the club to embark on excursions to waste recycling centres where the pupils will see how ?waste? is really used as ?raw material? in larger quantities by industries.