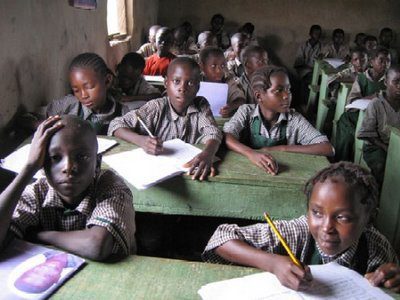 Municipal and District Assemblies have been urged to put up effective structures to take up the ownership of the Complimentary Basic Education Programme (CBE). Under the programme, which begun in 2013 and sponsored by the the Department For International Development ( DFID), children between the ages of 8 to 14 years, who are either out of school or dropouts, are empowered with training in literacy and numeracy skills for nine months, after which they are absorbed into the mainstream of the School system.

The Executive Director of Link Community Development (LCD), Dr Kennedy Quaigrain, who gave the advice during the launch of the second phase of the programme at Kamega, in the Bawku West District, on Wednesday, told the MDAs that they should not wait till the donor support ends or else it may affect the sustainability of the programme.

The second phase of the programme, which has just begun in the Bawku West District, would see the training of 1,500 children of school going age and school drop outs in sixty Communities.

They would be taught by facilitators recruited by the programme and are expected to be absorbed into the mainstream school system next September.

He stressed the need for the MDAs to support the Directorates of Education in their respective areas with the necessary infrastructure, to create conducive environment for teaching and learning and also retain the beneficiaries of the programme in school.

?We cannot compromise with education. Education is key to development. It is therefore incumbent upon all stakeholders to ensure that these children are retained in School?, he stressed.

Dr Quaigrain admonished parents to ensure that their children attend classes regularly and also place a premium on their children?s education, since it was the best profitable investment they could make.

The District Director of Education, Madam Patricia Ayiko, said the programme would help fast track the Millennium Development Goal Two, which is aimed at ensuring that all children of school going age were in school by 2015.

She gave the assurance that the Directorate would work effectively with all the stakeholders to ensure the programme is successful.

The District Chief Executive for the area, Mr Simon Ayande Agbango , in a speech read for him praised the programme and said the Assembly would support it to achieve the expected results.

Mr Samuel Ofori Boakye, Programme Coordinator of LCD said his outfit, which is a Non-Governmental Organization, collaborated with the Ghana Education Service during the first phase of the programme, which reintegrated 1,220 children in the Kassena Nankana Municipal and Kassena-Nankana West District into the formal school system.