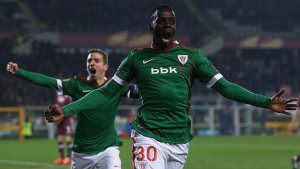 Ghana and Spain are set to be locked up in a tug of war over Athletic Bilbao sensation Inaki Williams, after coach Vicente Del Bosque revealed he’s considering the prodigy for the 2016 Uefa European Championship.

Top Ghana FA official have confirmed talks have began with the 21-year-old to pledge his international future to the West Africans.

Spain are moving in quickly to prevent Ghana from tying the youngster down after coach Vicente Del Bosque revealed plans to include him in the European championship.

Wiliams, who has featured for the Spanish Under-21 side, is also available to represent either Ghana or Liberia at the international level.

The Black Stars appear quiet appealing for the hugely rated Athletic Bilbao wideman as he may not struggle to get international recognition.

But the Spanish federation is leaving no stone unturned in their quest to ‘kill’ Ghana’s pursuit by including him in their squad for the European Championship in France this summer.

“He has great speed and is playing with the Spain under-21s. All of them are in my head and we will call on the ones we think are the most convenient. We will try to bring the best.”

Williams, born in Bilbao to a Ghanaian father and Liberian mother, has earned rave reviews this season having scored 10 goals playing as a winger.