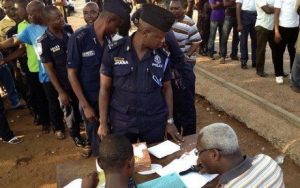 It appears the second round of special voting today December 4, 2016 is not addressing the issue of missing names on the electoral register as some voters were turned away at the polling centres.

Reports received from the Subin Constituency, Tamale Police Barracks and the Sunyani Liberation barracks indicate that a chunk of voters whose names were not found on the register can still not vote because the updated registers have still not captured them.

Some polling stations across the country according to checks by ultimatefmonline.com are still using the same old register that was used on Thursday December 1, 2016.

Frustrated security personnel, party representatives, Electoral Commission (EC) officials and some media personnel disclosed that they cannot still find their names despite earlier assurances by the commission that the matter will be resolved.

The Presiding Officer for the Subin Constituency told the media that his outfit is still working with the same the register used on December 1, maintaining that persons who cannot find their names on it should go to their original polling stations to vote on December 7.

At the Northern Regional Police Headquarters, frustrated security personnel have issued an ultimatum to the EC to address the discrepancies in order to enable them vote or they will be compelled to boycott the exercise.

Over 127,394 voters under this category were expected to cast their ballots but due to numerous challenges in the compilation as admitted by the EC, they were unable to vote.

After an emergency Inter Party Advisory Committee (IPAC) meeting last Thursday evening, it was unanimously agreed that the days for the special voting be extended to enable those whose names were missing but are captured as special voters to cast their ballots.

The situation on Sunday morning is however not different from  what had been experienced with officers of the various security establishments insisting they registered at the very  polling stations they turned up to vote.