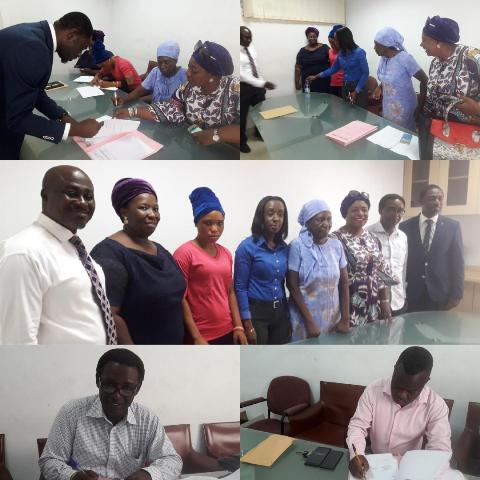 The Food and Drugs Authority (FDA) has signed a Memorandum of Understanding (MoU) with the Accra Technical University (ATU), Q.A. Consult and the National Association of Sachet and Packaged Water Producers Association (NASPAWAP).

The MOU was for skills development of persons in the selected industries in accordance with standards and regulations.

Under the terms of agreement, the FDA would among others, pay the initial project cost incurred to implement the programme from a support derived from the Skills Development Fund (SDF) grant.

The FDA, as the regulator, would also ensure that the food, herbal, cosmetics, and household chemicals industry members avail themselves for the initial training and certification programme.

The ATU is also mandated to train, retrain, and certify members of industry on a periodic basis as determined by the FDA.

The University is also expected to monitor and evaluate the Qualified Supervisor Course in line with certification and industry requirements.

The MoU also require that Industry players adhere to the mandate of the FDA per the provisions of the Public Health Act 2012, Act 851 as regulated by the FDA, and based on which the Qualified Supervisor Course curriculum for training and certification was being developed under an SDF grant support.

The QA Consult is to develop curriculum for Product Quality and Supervisor Training and Certification programme and also develop training specification jointly with the FDA, ATU as well as insight from industry.

Mr Kwame Dei Asamoah Anokye, FDA Principal Regulatory Officer said the agreement is expected to be in effect for two years from the day of signing and was subjected to mutual consent by all parties involved, adding that, it would seek to roll out a Qualified Supervisor Course.

Professor Edmund Ameko, Acting Vice-Chancellor of ATU said the university would play its role as expected.

Mr Johnson Opoku-Boateng, the Chief Executive Officer QA Consult, said the Consult would also lead the initial rollout of the Qualified Supervisor Course to train and certify members of Industry to acquire skills to work in industry to increase product safety, quality and efficacy.

Mr Ebenezer Nortey, the Welfare Officer of GHAFTRAM said the SDF grant, which sought to assist industry through training, would be of great benefit to them because it would help in adherence to standardised practices.

Mr Nortey said the intervention by the FDA, through the SDF grant, would not only enhance the capacity of members to apply standardised practices but would also ensure the safety of all users of traditional medicines.

On her part, Ms Rashida Abdullai, the President of Native Soap Makers Association said the training helped them to adhere to standard practice and also paved the way for them to export their product.

She said the Association, through the training, would increase knowledge on producing standardised liquid soap, bathing soap, Parazone and shea butter, among others, products to help them in making ends meet.

Madam Rosemercy Mills Robertson, the Vice President of AWEP, said the grant support programme was a breakthrough for the association because it would add more value to its members, who are comprised of women entrepreneurs in the country.

Mr Alex Larwer Djaba, the President of COSMAG said the SDF grant support was a timely project since it would help the country to manufacture standardised cosmetics and household chemicals to both the local and international market as members were already doing.

Mr Mangnus Nunoo, the National President of NASPAWAP said the SDF grant support programme was a step in the right direction taken by the FDA because it would help to increase the safety standards in their productions.