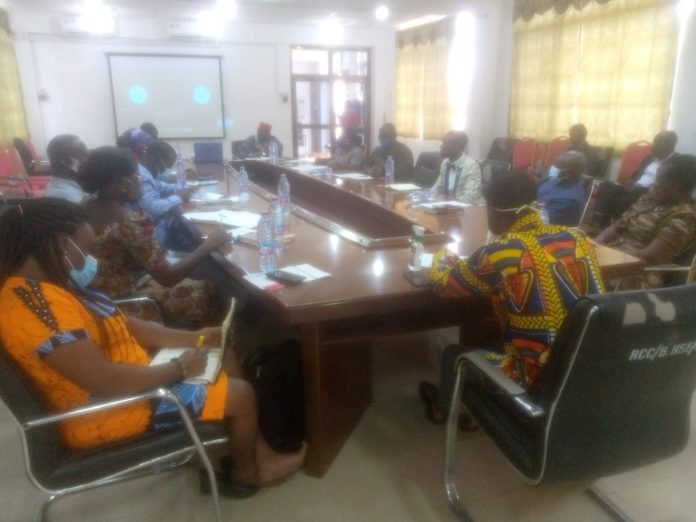 Stakeholders at a forum in Bolgatanga in the Upper East Region have called for collaboration among various mandated institutions to tackle issues affecting the development and growth of children.

They said working together and shareing information and expertise, would deal holistically with their challenges and ensure effective implementation of laws and regulations on child protection.

They mentioned some of the issues as; rape, streetism, defilement, child labour and abuse and sexual and gender-based violence leading to teenage and unwanted pregnancies among others.

The stakeholders made the call at a Regional child protection committee meeting, organized by the Regional Coordinating Council in collaboration with the Department of Children with funding support from the United Nations Children Fund (UNICEF).

The meeting afforded them the opportunity to present the activities undertaken in the first and second quarters of the year with regards to child protection and way forward to address their issues.

Mrs Abena Aprekua Badu-Aboagye, the Principal Programme Officer at the head office of the Department of Children who contributed to the discussion via zoom noted that for the country to address issues of children there was the need for inter-sectoral approach and coordinated efforts from stakeholders and institutions.

She said although there were varying factors, poverty was one key cause and proposed that parents of street children be enrolled unto the Livelihood Empowerment Against Poverty (LEAP) programme.

She said there were many laws and regulations including; the Child and Family Welfare Policy among others, however, it was not effectively implemented to protect children well enough from harm and abuse.

Mrs Georgina Aberese-Ako, the Upper East Regional Director of the Department of Children said the Child and Family Welfare Policy was an effective programme that would protect children from abuse when fully implemented.

Mr Mahamadu Assibi Azonko, the Regional Coordinating Director, said the Child and Family Welfare Policy which was launched in 2015 provided a comprehensive set of objectives and strategies to achieve its overall objective, to establish a well-structured and coordinated Child and Family Welfare system that promoted the wellbeing of children, prevented abuse and protected children from harm.

He said when the policy was fully and effectively implemented, it would empower children and families to better understand abusive situations and make choices to prevent and respond to situations of risk, build capacities of institutions and service providers to ensure quality of services for children and families in urban and rural areas and would promote reform of existing laws and policies to conform with the Child and Family Welfare system.