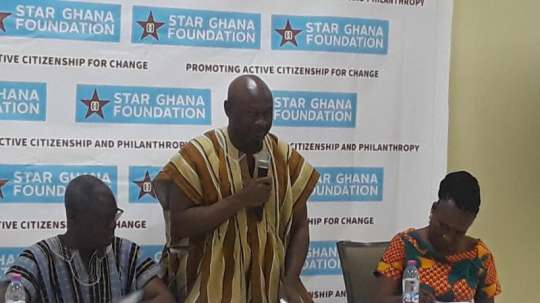 The Star Ghana Foundation has committed an amount of over GHC5,170,400 towards ensuring that the 2020 elections is credible and peaceful.

The amount is supporting actions and programmes of some 26 Civil society organisations (CSOs) and national think tanks, which would be implemented to help attain an inclusive and peaceful election and smooth transition too.

Presenting the 2019 annual report at the first ever Annual General Meeting of the Foundation, Mr Amidu Ibrahim-Tanko, its Executive Director, said the Foundation has over the past one year, built upon the work started by the STAR-Ghana programme around convening catalyzing citizens’ actions on key local and national issues.

Also, various convening’s were organized in partnership with CSOs and Parliament around key issues such as youth, unemployment, education, and health and involving over five million citizens.

He explained that the Foundation inherited 78 projects initiated by the Star-Ghana Programme under its various calls, while the Governing Council and its committees have provided strategic oversight in the implementation of these projects and ensuring that they contributed to the achievement of the programme and Foundation’s goal and purposes.

Mr Ibrahim-Tanko said over GHC17, 913,000 had been raised, through a grant from Christian Aid, to support citizen’s actions towards increased accountability and responsiveness of government at all levels to citizens’ issues and needs.

He said the work of the Star Ghana Programme, which was mainly a donor funded programme, by the European Union, Danida and DFID for over the past 10 years, involved providing funds for institutions to run development activities and would be finally ending in September this year.

The Foundation, which is a Ghanaian organisation, would therefore, continue to operate and implement programmes in the areas of advocacy and social inclusion in support of development at the community and national levels, Mr Ibrahim-Tanko said.

Meanwhile, the Foundation is in the process of finalising eight funding proposals for onward submission to international foundations and donor agencies to support the Star Foundation’s work.

Mr Ibrahim-Tanko said the Foundation’s first tranche of funds was disbursed in January this year and would go into the mobilization of community members to educate them on how to influence political party manifestos, and other activities.

Dr Charles Abugre, Vice Chair, Star Ghana Foundation, on behalf of Mrs Esther Ofei-Aboagye, the Chair of the Foundation, welcomed all stakeholders who attended the AGM including the Governing members and Subscribers from all over the country.

He said the Foundation was launched in November 2018 as a centre for active citizenship and inclusive development.
“It was envisaged as a self-sustaining civil society support mechanism that would be embedded within Ghanaian civil society and with the leverage to facilitate a coordinated civil society action.

Such a facility had been identified as a critical requirement for enhancing civil society effectiveness particularly in a Ghana “Beyond Aid”, Dr Abugre said.

He said over the past year, the Governing Council had worked to ensure a smooth transition from the Star Ghana Programme to the Foundation through the work of the various Committees of the Council, supported by the Secretariat.
As a result of the Committees’ efforts, a number of important products including the Foundation’s manuals for Finance Management, Grants management and Human resources management had been generated.

The Foundation have also developed a financing and Fundraising Strategy as well as a Gender and Social inclusion Strategy, among others.

“The First Year has been a demanding year, combining the challenges of a new organization with imperatives of national development, But it has also been a year of renewed energy in our determination to work more effectively, along with our partners to enhance the cause of active citizenship in this country”, Dr Abugre said.

MTN Ghana pays out 70 percent of profit as dividend