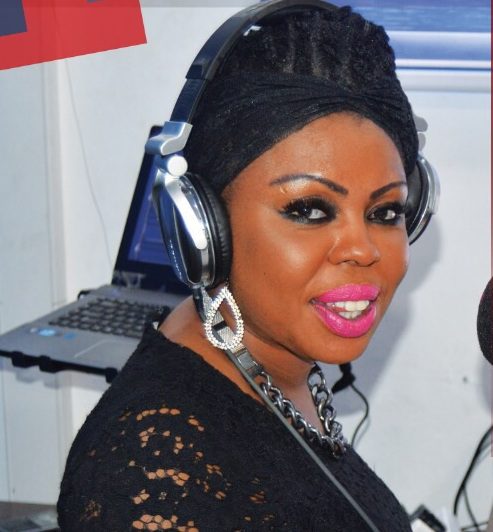 By now even hard core haters of Valentina Nana Agyeiwaa also known as Afia Schwarzenegger can testify that the mother, wife, radio and TV host is a creative force who cannot easily be tamed. To think that just 7 years ago, this in-demand lady was an unknown quantity baffles many but such is the red hot form the former star of the Afia Schwarzenegger Show is in that already she has provided her set of skills for Hitz FM, Happy FM, eTV, UTV and now Kasapa FM.
There is nothing out of the blue on her new show code named the ?Aben Woha Show? which airs from 10 am to 12 noon on week days but already Valentina is drawing in the numbers.

Often, the show opens with old time gospel tunes from the 90?s from stars such as Abawa Cornie, Mama Esther, Tagoe Sisters and others from that stellar squad with Afia singing along.

Other genres such as highlife and urban music also have representation as does Afia?s comical LPM?s coupled with doses of proverbial sayings and historical tit bits.

Afia?s formula which is being part abrasive, part endearing and part comical seems to be working the magic as the number of WhatsApp messages and phone-ins suggest assisted by Benduka the producer.

For a station which is less than 3 months old and a programme even younger, the striking thing about the ?Aben Woha? mid morning show is the sheer volume of adverts the show commands easily translated to revenue.

One cannot tell if the jingles are rolled over from mother station Starr FM or are as a result of Kasapa?s sale and marketing team but already Ghacem, Star Assurance, End-Point Homeopathy Clinic, Winzol Dewormer, Herb Afrik and Mandigo Bitters handlers have all fallen on the Adabraka based station to help them reach targeted audiences to boost sales figures and beat the competition.

The greatest bane of Choice 102.3 FM from whom EIB Network acquired the frequency was that adverts were not flowing in to enable management adequately remunerate staff, pay utility bills and innovate.

In 2010 when I worked at the station as a news guy and sales officer, the trauma I underwent was with difficulties in persuading potential clients to do business with the station, as they maintained to advertise on Choice with no result, they would rather advertise on Peace FM and Joy FM for 4 times the rate knowing they would reach their targeted audiences.

Not even attempts by my immediate boss then, PNC?s Youth Organizer Abu Ramadan who was the sales head to offer barter terms could assuage their skepticism. It is tragic that a station which groomed the likes of Jon Germain, Yaw Ampofo Ankrah, Kafui Dey and had Tommy Annan Forson fell from such grace while peers Joy FM and Radio Gold continue to thrive.

So to see the immediate transformation on that same frequency delights and at times intrigues me indicating that programming, positioning and prudent management makes a critical difference in the life of a radio station.

Afia incorporates Facebook comments from fans into her show endearing herself even more to them as they can?t have enough of her. She proves she is a cunning fellow who continues to give fellow presenters a run for their money. On one occasion Afia asked listeners to offer the English name for local delicacy ?kulikuli? and the volume of resultant response was disarming. Her lovers without a doubt show their affection in tonnes.

As with most gifted folks, Valentina Agyeiwaa?s weakness is use of abrasive and risqu? language which can be tasteless, if only she could contain some of her urges, the future promises to be even brighter for the radio/ TV host, actress and humour merchant.
It is increasingly becoming clear that it isn?t for nothing that Kasapa 102.3 FM maintains that its presence ?adzi bebia.?