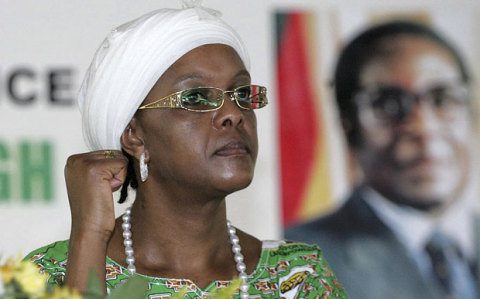 Reports that South African-born Zimbabwean First Lady, Grace Mugabe, is wanted by the Johannesburg police for assaulting a 20-year-old model who walked into her hotel suite with an extension cord, is a diplomatic distraction that needs to be quickly resolved and be done with (See “South Africa Borders on ‘Red Alert’ for Grace Mugabe” BBC / MyJoyOnline.com 8/17/17). The details are a bit sketchy, but it appears that the alleged young woman victim of the assault, Ms. Gabriella Engels, had some sort of relationship with one of two sons of the Mugabes who were sharing the suite with their 52-year-old mother, ahead of a conference of southern African leaders due to be attended by their 93-year-old father, Mr. Robert Mugabe. The latter was not in the hotel suite with his family at the time. (Note: As of this press preparation, Mrs. Mugabe was reported to have departed South Africa).

It appears that Ms. Engels’ relationship or acquaintance with the Mugabe brothers is one that displeases their mother. But whatever the true details of the story may be, the Zimbabwean First Lady had absolutely no business assaulting the young woman, as has been widely reported. Indeed, as of this writing, what seemed to be complicating matters was the alleged failure of Mrs. Mugabe to make a court appearance and put in a plea. Grace Mugabe, who has been vigorously scheming to replace her husband as the next President of Zimbabwe, is not popular both within and outside her country. She has, for example, been declared persona-non-grata by the European Union countries, as well as the United States, for some unspecified number of criminal offenses. She is also alleged to have been awarded a doctorate in sociology by the dons of the University of Zimbabwe, without having attended any classes or written and defended a dissertation.

For me, personally, though, what makes this case especially strange is the fact that the plaintiff, who appears in a photograph with a plaster or band-aid on the left side of her forehead, is being represented by Mr. Gerrie Nel, the Afrikaner lawyer who successfully put Paralympic athletic champion Oscar Pistorius, who was convicted of manslaughter in the shooting death of his model girlfriend a couple, or so, years ago. Then, there is also the Afrikaner human rights lobbying group, Afriforum, that is reportedly staunchly backing Ms. Engels, who appears to be “colored,” from both her last name and a photograph of her published on the BBC’s website.

What is clear here is that the politically disgruntled Afrikaners want to make big capital out of this case, both morally and financially. The Mugabes, who have been widely alleged to be Zimbabwe’s wealthiest family, should have absolutely no problem striking some form of financial settlement with Ms. Engels and her legal team. This is the second time in as many years that a foreign dignitary has come under the radar of the South African law-enforcement agencies. In 2015, while attending a conference of African heads-of-state and governments, Sudan’s President Omar al-Bashir had the International Criminal Court (ICC) seeking a warrant for his arrest and arraignment for war crimes without success.

The diplomatic status of Mrs. Mugabe has continued to be debated by the South African media. Whatever the outcome of this case, Mrs. Mugabe is bound to have learned at least a couple of lessons, namely, how not to keep embarrassing her second husband in international diplomatic circles. And then, how to rein in her apparently hot and violent temper.