News Ghana
Home Inside Africa Nigeria The Show Is On, Obiano and Obi Exploits 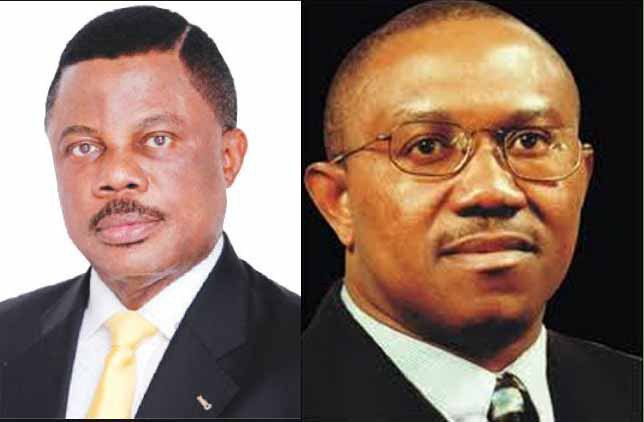 At first it seemed that the transition was one made in heaven, all for the progress for Anambra they claimed,in their manner Dim Ojukwu in his grave had ordained it, Bianca and Victor Umeh had endorsed it, it was for the people of Anambra to buy into it. No expense was spared, billions of Naira found its way into the system, it found its way into useful arenas, and as we, all know money talks in these climes.
Then came the November 16, 2013 polls and Nigerians have knowledge of what transpired, the anointed one from Aguleri was declared the winner despite the cries of foul play. The plotters rejoiced, for reasons best known to them, the Agulu to Aguleri change of baton was perfect and the so-called gains, which they claimed that Anambra had made, would be consolidated.
March 17th came and Obiano the new helmsman took the mantle of leadership, under the watchful eyes of Obi, his predecessor, who boasted that his own predecessor was not on hand to pass the baton to him, now here he was doing that to Obiano. He was to have no business in any matter affecting the business of governance in Anambra, far from it!
But not too long, not even three months after the handover, did we the onlookers begin to notice that all was not well with the duo. At first, many dismissed this as the lazy machinations of the market trader in Eke Awka to compensate for the lack of business activity; for some believed that this was too early for the honeymoon to be over. Given the Nigerian trend, it normally takes an average of a few years for godson to part with his godfather and since that of Chris Ngige with the Ubas was an exception, Anambra couldn?t be that lucky or unlucky to experience such a schism twice. But soon the rumors began to give way to silent musings in certain quarters and soon the bubble burst, when the former governor resigned as the APGA?s Board of Trustees (BoT) chair before defecting to the PDP.
While it is not clear on what matter or matters made both actors go their different ways, I believe that these matters do not boil down on good governance and when rumours and social media talk about the repayment of a loan that was raised for an election, or about who was to run for senate in Anambra Central or some form of meddlesomeness or a shortage of funds claimed to have been left in the treasury by his predecessor, I have studied them and believed that there is some truth in them.
For example as the Obiano-Obi impasse enters the rofo rofo phase, many have traced the fight to the N86 -13824, Obi claimed he left behind for the Obiano administration. This is also including monies that Obi claimed were saved in the purchase of local and foreign denominated bonds and other businesses like the Sab Miller brewery. Now whilst Governor Obiano has not come out to say how much he met in the state?s treasury, his body language and talk by some of his trusted aides suggest that the situation was the otherwise.
Now if it is true that former Governor Obi never left any monies in our public until, then the question is why has Obiano not come out to state things as he met them? Why the quiet murmuring? Why is the matter assailed in the social media and yet the man who knows it all is quiet about the matter? Why are text messages from the governor?s supporters to my phone suggesting that there were no funds in the treasury?
If it is true, that Ex Governor Obi didn?t leave the specified amount it is for Obiano to tell but if he chooses to do otherwise he should then save ndi Anambra the trouble and go on with the business of governance.
The state has a lot of pressing issues to deal with, there are schools to be built, roads to be constructed, the quality of life in Anambra needs to be raised, surely we cannot invest such time needed to move this state forward in settling what may be the petty squabbles between the duo. Anambra is surely bigger than them. However, if tomorrow the battle between the duo is one of ideas and ideology, on how to make governance work, on how to move the state forward then the fight will be worth its pitch and persons like myself will then tune in.
However, for the now, the Obiano and Obi show isn?t worth my while and it isn?t worth the time of ndi Anambra too, whatever their sychophants tell them or fail to tell them. Anambra is a land of giants, I advise the duo to start acting as such.