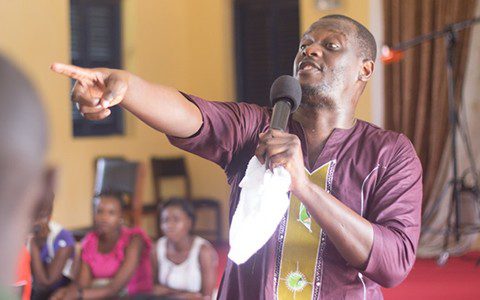 After many years on drugs until he was ‘arrested’ by the Holy Ghost about five years ago, Lord Kenya, one-time Ghana’s Artiste of the Year and currently an evangelist, insists ‘there is no addiction in this world that is irreversible.’

Evangelist Kenya debunked the belief that ‘an addict will remain an addict for life,’ saying with the support from relatives, friends and colleagues, addicts could be liberated.

He was speaking at the inauguration of Alcohol Anonymous and Narcotic Anonymous clubs at the Department of Psychiatry of KATH as part of its Mental Health Month celebration under the theme: ‘Dignity in Mental Health: Lets live it now!’

Sharing his personal life and empathising with some known drug addicts at the Komfo Anokye Teaching Hospital (KATH) in Kumasi last Tuesday evening, the Rap Heavyweight Champion said beyond God, it also takes a strong character, will-power to be freed from the shackles of drugs.

Although the now preacher man frowns on being referred to his past, especially with regards to his ‘worldly music,’ Lord Kenya said identifying with such ‘social outcast,’ and to help liberate them falls within his calling.

“So many people (addicts) want to shun drugs but the society we live in and the people make it difficult to do so”, the man of God said.

“We need to help, many need help, but God is the answer”, he added.

He said many of the so called correctional centres across the country established to counsel deviants had rather turned into an environment of ‘grooming wrongdoers.’

“Most of these institutions have become avenues for the addicts to acquire ‘Masters’ in drug addiction’ rather than a place to help them.

He has, therefore, appealed to the authorities to redirect their energies into enforcing the laws and punish especially offenders at ‘these correctional homes.’

Lord Kenya advised the youth to choose their friends wisely and do all they could not to succumb to peer pressure.

He said bad friends will do them no good, rather they lead them to the ‘door of no return.’

“These friends are called cardboard friends. They see you as a cardboard full of wisdom, success, and prosperity. So they always get closer just to destroy you and leave you to rot”.

Lord Kenya seized the opportunity at the programme to descend on journalists who preferred to promote his ‘worldly songs’ and not his gospel music.

Perhaps, bad news sells and that is why you guys keep referring to my past and not help me propagate the gospel, he said.

He pleaded with the media to promote his present life and not his ‘unattractive past life.’