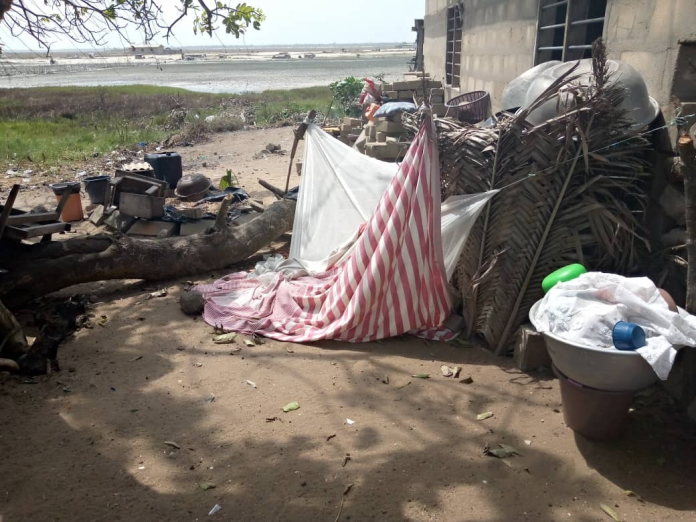 Residents of communities affected by tidal waves in the Ketu South Municipality have blamed government’s indifference over the years for their current woes.

About 1,000 residents have been rendered homeless following the destruction caused to about 87 households by recent tidal waves attacks.

The displaced said the sea would not have collapsed their cement walls, brought their building down and taken all their belongings away had successive governments responded to their calls and acted swiftly to erect defense walls to protect them from the raging sea.

They were speaking to the Ghana News Agency, when officials from the Ministry of Works and Housing (MWH) led by the Municipal Chief Executive visited the area to assess the situation after residents had earlier staged a demonstration to tell the world of their plight.

Mr Owusu Ansah, Hydro Director at MWH representing Mr Asenso Boakye, the Minister assured the people that their concerns would be dealt with on a ticket of urgency to secure the shoreline and protect the remaining buildings.

He said just as government had built the Atorkor, Dzita-Anyanui sea defense projects in the Anloga District and the Agavedzi-Blekusu phase 1 in the Ketu South Municipality, the Ministry would further discuss the beginning of phase two to cover the areas hit by the sea.

Mr Ansah however called on the residents to exercise patience, give the government more time to source for funds to undertake the project, which he said was capital intensive saying, times were hard for the State.

This message did not assuage the pains of the homeless nor did it give hope to those few households, who still had their buildings standing but lived in constant fear of what the sea could do in the next second.

They said instead of staying quiet, which they had done all these years the sea had disturbed them, they would rather be on the road in this month of April shouting for help because from next month to the seventh, there might be no Salakope or Amutinu to salvage.

“I built a house at Blekusu which had long been taken by the sea. I have another one at Amutinu and as we speak, the sea is threatening to take it also. Look at me, at this stage of my life, what can I do, where will we go, who will we turn to and how do I fend for my family? Yet, no government can feel our pains and act fast to rescue us,” Mr Felix Amematsror, an elderly fishing net owner cried out.

“I see indifference on the part of governments as reasons to blame for our current sorry state.

We don’t sleep at night anymore for fear that the sea which becomes deadly at night will come for us in our sleep. What we’re seeing now is nothing compared to what’s coming from May. Can you imagine what will happen to us before any help comes? We’ll not sit down and watch the sea ravage us. It’s better to be on the road and make noise,” Torgbui Emmanuel Anomoo Tettey, Salakope Chief Fisherman noted.