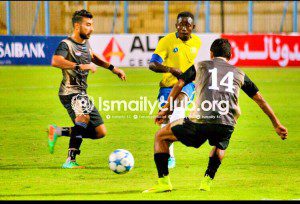 Ghana star Torric Jebrin continued his impressive display for Ismaily in the Egyptian league as they secured an important away point at Makowloon FC.

The former Hearts of Oak midfielder was splendid for the former African champions in their opening game as they recorded a 2-0 win over El Elntag El Harby at home.

The Ghanaian’s spectacular performance in the first game compelled the head coach to hand him another starting role in their second game away  in Cairo but the Makowloon FC defense were too strong for Torric to pierce through.

The draw earned gave Ismaily four points in two matches and has placed them 5th on the table.

Torric joined the former African champions last summer after falling out with Bursaspor in Turkey and hopes to revive his career with a blast in the Egyptian top flight.