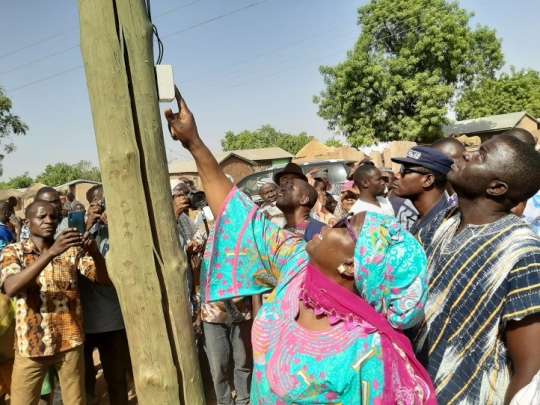 Hajia Alima Mahama, the Minister of Local Government and Rural Development, has commissioned a project to connect Tunni, a community in the Gambaga Municipality of the North East Region, to the national electricity grid under the Rural Electrification Project.

The Project formed part of government’s vision to achieve universal electricity coverage and aims at connecting 622 communities in the Savannah, North East, Northern, Upper East and Upper West Regions by end of 2020.

The community, which has a population of over 2,000 and two polling stations, could not hide their joy at a durbar after the Minister switched on the first light in the area.

Speaking to Journalists at Tunni, after addressing the durbar of Chiefs and people of the area, the Minister said Tunni was the 39th community in the region to be connected to the national grid and there were about 50 more communities yet to have electricity.

The Minister, in the company of Mr Danladi Abdul-Nashir, the Gambaga Municipal Chief Executive, Regional and Constituency Executives, said they were linking up with the Ministry of Energy for support.

Hajia Mahama, also the Member of Parliament (MP) for the Nalerigu-Gambaga Constituency called on members of the community, especially women to take advantage of the electricity and venture into businesses that would be of economic benefit and enable them earn a living.

She said she was content with the level of development in the Region, adding that apart from the electricity supply, government had constructed a Community-Based Health Planning and Services (CHPS) compound in the community to cater for their health needs.

“The next thing is for us to get the supplies to the facility; the beds and equipment. The District Directorate has already assigned someone to take care of the place, and that person has been given a motorbike,” she said.

Some community members, who spoke to the Ghana News Agency after the programme, said it was a delight to see light in the community, which would be of economic benefit to them, and appealed to the Minister to assist them with refrigerators to enable them start businesses such as the sale of sachet water and locally prepared drinks.