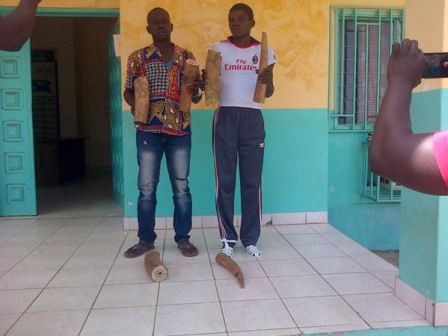 Last April 21st, 2015, two ivory traffickers, Boucary Diallo, 40, a Gabonese national of Malian origin residing in the city Mekambo and NDJONE Manelle, a Congolese, 26 years old residing in the Mazingo village fell into fishing nets of the National Directorate of Documentation and Immigration of the Department of Zadie, assisted by the ANPN and the NGO Conservation Justice. Mr. NDJONE Manelle is guilty of having sold 2 tusks of ivory to Mr. Boucary Diallo. As for the latter, he is alleged to have purchased the said tusks which he then sawed into six pieces for resale. Known among village communities of the Department as a great sheep and chicken trader, Mr. Diallo Boucary had been under suspicion for more than three years of being involved in the sale of ivory and other products of fully protected species.

Mr. Boucary Diallo and Mr. NDJONE Manelle were sent to the Water and Forestry Cantonment in the Department of Zadie and after hearing them on minutes, were brought before the Public Prosecutor at the Court of First Instance in Makokou. They will be judged for their actions and risk a prison sentence of six months and ten million in fines.

9 on bail for offensive conduct