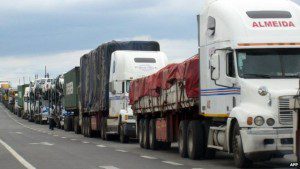 The government of the United Kingdom is planning to temporarily relax visa rules to invite foreign workers amid a shortage of truck drivers, UK media reported on Saturday.

According to Sky News, the UK lacks over 100,000 drivers, with the largest shortages amid the drivers of heavy goods vehicle.

The lack of drivers has caused a shortage of fuel, with cars queuing at gas stations, and other goods, UK media reported.

Even though a spokesperson for the prime minister’s office said that the country had “ample fuel stocks…and there are no shortages,” Prime Minister Boris Johnson is believed to have agreed to introduce short-term visas for foreign drivers.

More information on the visa change is expected to be announced on Sunday.

On Thursday, energy company British Petroleum announced that tens of forecourts in its 1,200-strong network were experiencing fuel shortages, while Tesco and Esso said some of their sites were also affected.

On the following day, the Transport Minister Grant Shapps said that “the problem is not new” and has been happening for “many months throughout this pandemic.” However, the Road Haulage Association also blamed Brexit for the shortage of truck drivers.