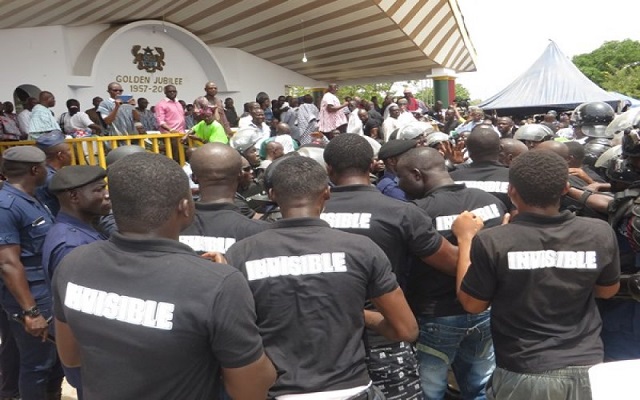 The number of illegal private security firms operating in Ghana, despite an existing law to regulate them, is a worrying concern, the UN Working Group on Mercenaries said Wednesday.

Government figures suggest there are some 400 groups employing around 450,000 people, in a country where the police force numbers around 33,000, said the UN Working Group on Mercenaries in a statement.

“The ratio between police and private security personnel, even if the latter are unarmed, is among the most worrying I’ve seen in any country,” said Patricia Arias, one member of the group which released a statement.

An estimated 1.3 million illegal weapons and reported arms smuggling into the country had worsened these security threats, they noted.

“We have seen many times how countries like Ghana, with rich natural resources and porous borders, can fall prey to ‘mercenarism’ and mercenary-related activities when the security situation is undermined by violence – often at the hands of armed groups,” said Arias.

The group took part in an official mission to Ghana from Dec. 8-15 and urged the government to introduce tougher measures to regulate the private security industry.

Along with that they issued a warning that the spread of vigilante groups and armed individuals threatens the country’s peace and stability.

“Ghana is often referred to as an ‘oasis of peace’ in the region and has so far escaped the scourge of mercenarism and foreign armed groups,” said Anton Katz another member of the delegation.

He said Ghana had even become “a place of refuge for many who have fled armed conflicts and instability in their home countries.”

“We commend Ghana for achieving this peace and stability. It is crucial that it continues, and addressing current security threats can help achieve this,” he said.

The group raised concerns, however about the huge number of private security companies and the spread of vigilante groups and armed individuals, including those collaborating with foreigners in illegal mining, known as “galamsey”.

“Combating these threats effectively now can prevent potential tensions and conflicts that may open the door to mercenary activities,” the experts said. Enditem