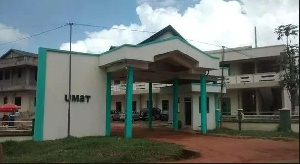 Professor Richard Kwasi Amankwah, Vice Chancellor of the University of Mines and Technology (UMaT), Tarkwa has expressed appreciation to the government for the massive support received through the Minerals Development Fund (MDF) and the Ghana National Petroleum Commission (GNPC).

He said six major infrastructural developments costing millions of dollars were being financed, including the 5-storey administration block and the GNPC School of Petroleum Studies, which have been handed over to the University.

Prof Amankwah emphasized that the government also gave financial clearance for the recruitment of 97 staff, adding that UMaT was grateful to President Nana Addo Dankwa Akufo-Addo.

Addressing students at the 13th congregation, the Vice Chancellor pointed out that the Ghana Chamber of Mines provided financial support through its Tertiary Education Fund (GCM-TEF).

Currently, the 3-storey Ghana Chamber of Mines Mining and Minerals Block estimated at $1.20 million was under construction, he indicated.

In addition, Prof. Amankwah observed that the Chamber supported the University’s drive to promote electronic learning with a Smart Classroom.

He said some faculty members and post-graduate students were awarded research grants to undertake various inquiries into topics that are relevant to the mining industry.

The Vice Chancellor observed that during the national dialogue on responsible mining, the University asked the Ministry of Lands and Natural Resources to make lands available for them to explore and generate geological data and mineralized concessions for licensing the small-scale miners.

“The Ministry has responded to our request and given UMaT a 4 km2 land and resources to conduct exploration. This presents a great opportunity to contribute to the President’s agenda on responsible small-scale mining. The Minerals Commission has also released two 25 acre parcels of land to the University for us to start the UMaT Small-scale Mine” he added.

Prof Amankwah said, “This land would be developed into a model small-scale mine, generate spaces for all year-round field work for our students, solve the perennial challenge of looking for spaces for student internship and also train small-scale miners on best practices. The mine would also be a source for internally generated funds”.

He pointed out that Gold Fields Ghana Ltd donated an ambulance to the University Clinic and promised to build a hospital next year and also supported many of their programmes and projects including the Arboretum.

“To the mining and allied companies, our state-of-the-art environmental laboratory is available and I will urge you to extend the support by bringing your samples for analysis in the UMaT Environmental Monitoring Laboratory” Prof. Amankwah added.