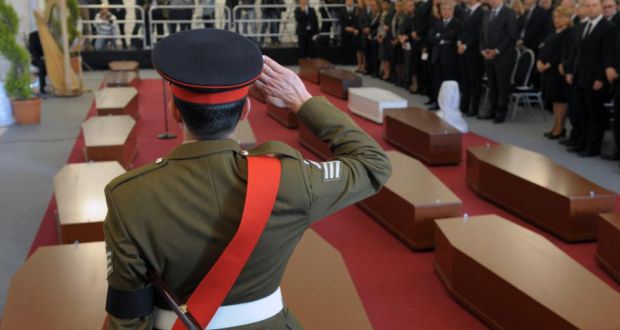 Funerals for the victims of the capsized migrant boat in the Mediterranean have been held in Malta, BBC reports.

Italian police say the captain crashed the boat by mistake against a merchant rescue ship.

The number of deaths in such incidents has now reached 1,750 so far this year.

Migrants who themselves made the perilous journey across the Mediterranean Sea in search of a better life joined Maltese government officials and international representatives in a white marquee erected on the helicopter pad outside Valletta?s Mater Dei hospital.

As the coffins were set down on a red carpet, women from Somalia, Eritrea and other parts of Sub-Saharan Africa wept openly, wiping away tears with their headscarves.

Imam Mohammed El Sadi said all those who had died were brothers before God.

He told the congregation that all people were migrants and that life was a journey.

The Bishop of Gozo, Monsignor Mario Grech, said the men were fellow human beings, regardless of creed, nationality or race.

With no known families to return their remains to, the men will be buried in common graves in Malta?s Addolorata Cemetery.

Victims Of Internet Fraud: Speak Out, Share Your Experience with Relevant Stakeholders