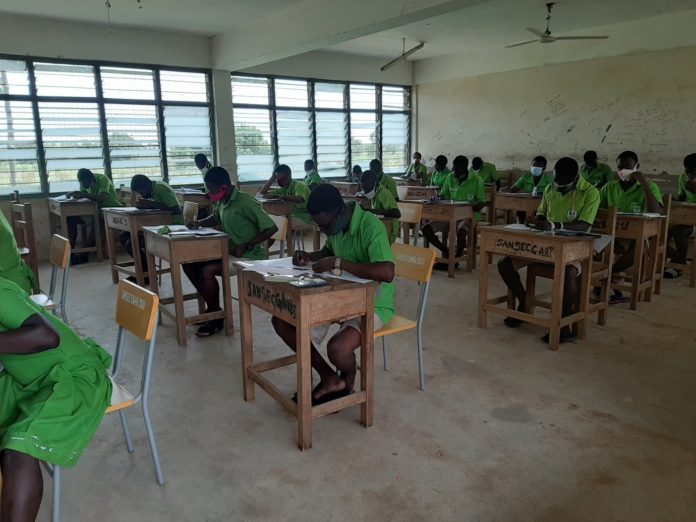 Some students of the Sandema Senior High School (SANSEC) in the Builsa North District of the Upper East Region, say they are disappointed and downhearted after writing the first examination paper.

The students say they were misled by numerous questions on social media regarding the on-going West African Senior School Certificate Examination (WASSCE).

According to them, they concentrated their energies and solved the perceived leaked question papers all through the night only to be presented with different questions they had not prepared for.

“Most of us came with phones and were busy solving questions we saw on social media until we were disappointed this morning.

The questions we wrote were strange as compared to what we spent time solving on social media,” Master Victor Ndaugo an Agricultural Science student disclosed to the Ghana News Agency (GNA) when he stepped out of the examination hall.

Despite the challenges, Master Ndaugo said “So far so good, we can’t say we will fail, we will pass, just that the grade we want we wouldn’t get.”

A Visual Arts student, Master Mershach Stanley Danlogo, who corroborated what his colleague said, added that “All of us had an interest in the social media questions. We all thought that those were the questions we were going to meet, but when we entered, we were just confused. We didn’t know where to start or where to end.”

“Yesterday, they were just sending the questions and they will tell you, this one has been cancelled, this has been confirmed, it was just all over. Most of us had an interest in those questions circulating on social media,” he said.

He said they had lost hope on questions from social media, “The most painful thing is some paid for the questions, those who have brothers or sisters in other schools down south, shared the questions with us, now we don’t have any interest again because of what happened today.”

Ms Edina Nbole, a General Arts student who also shared her experience with the GNA, said even though she faced some challenges with the second paper, the examination was generally good.

Asked the grade she was expecting, she said “I expect to get grade B.”

One of the invigilators on condition of anonymity disclosed that “some of the students presented empty answer sheets to us.”

The students wrote the first theory of Integrated Science paper on Monday, August 3, 2020.