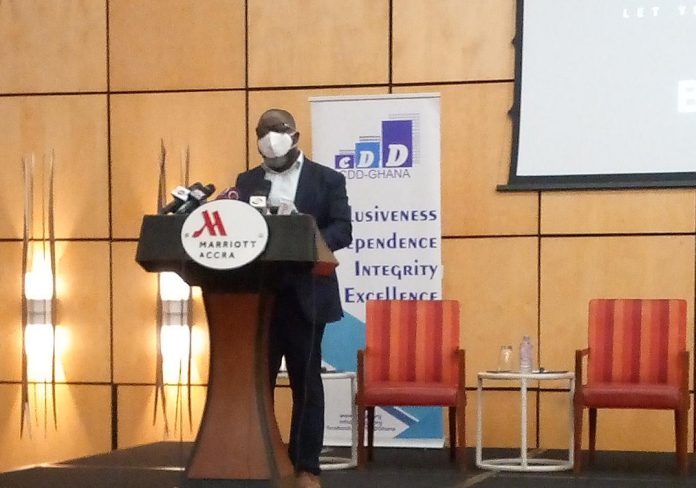 He said the regulator would help to standardise the Council’s operations and ensure that it delivered as expected to produce “true and learned students.”

Mr Asare said that had become necessary because WAEC set its questions, marked by itself, and did an assessment of schools, students, and their results as well as examiners by itself.

He recommended on Thursday at an engagement by the Centre for Democratic Development Ghana (CDD-Ghana) on a post-election dialogue with the media to assess some perennial challenges in the educational system and responsiveness of the New Patriotic Party 2020 manifesto to them.

Mr Asare said WAEC was not monitored and evaluated by any set standards and regulators, hence its credibility dilemma assessment systems are occasioned by frequent leakages in examination questions and other malpractices.

“We need regulators for WAEC to set standards and ensure that sanctions are applied to any individual, group, or entity that fails to apply the law. These credibility gaps continue to exist because WAEC apart from enjoying a comfortable monopoly for over 50 years is not under any form of regulation that compels the adoption and observance of standards for the assessment and neither is it accountable as a semi-autonomous body operating under the Ministry of Education,” he said.

Mr Asare suggested that the National Council for Curriculum and Assessment be empowered to serve as a regulatory body for WAEC, explaining that, that could help to reduce the costs involved in setting up a regulatory body.

Mr Asare said research had shown that there were 500 primary schools without kindergartens and only two per cent of kindergartens had nurseries, a situation that contributed to the high numbers in the privatization of nurseries.

Basic school drop-out remained high with a cohort survival rate as low as 18 per cent by JHS 3, he said, adding that the transition from primary to JHS posed a serious challenge to retention, as students in some rural communities without JHS commuted for long distances of up to 10 kilometres to school.

“In the next four years, the Ministry of Education must work to align pre-primary, primary, and JHS by completing the adaptation of the Basic School Concept where every Primary school must have a KG and JHS, all called ‘Basic School’ with one headmaster,” he added.

The Executive Director said since the introduction of the Capitation Grant to finance the Free Compulsory Universal Basic Education Policy in 2005, delays in the release of funds to finance education delivery in schools continued to be the most insurmountable challenge that had a direct impact on resource availability and learning outcomes.

System reforms and real commitments, he said, were required to ensure funds meant for running basic schools arrived before the beginning of the term, and in adequate amounts.

He said it was also relevant to sustain the positive contributions of the Parent-Teacher-Association (PTA) in supporting education development at the household and community levels, and called on the Ministry of Education to build consensus with stakeholders on strategies for remobilizing PTAs.

Mr Asare also bemoaned the over-concentration of teachers in urban schools to the detriment of rural and deprived schools as well as the posting of teachers to primary schools in communities whose indigenous languages were alien to the teacher.

This made it impossible to teach in conformity with the Ghana Education Service local language Instructional Policy being implemented at the early grade level.

He recommended that Ghana reviewed the Dual Desk Policy in basic schools and gradually adopted a single desk policy which already pertained in private schools considering how much COVID-19 and its attendant physical distancing protocol had exposed the deficiencies in the use of dual desks in schools.