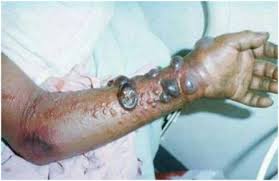 The risk of contracting the hemorrhagic fevers is ever-present and it is important that basic personal hygiene practices are maintained even after Ebola disease has been contained. Joana Ansong, Professional Officer, Health Promotion of the World Health Organization (WHO), Ghana, made this remark at a workshop in Ho for core members of Regional Risk Communication Teams on Tuesday.

Participants were from the Volta, Greater-Accra and Eastern Regions.

WHO is sponsoring the workshops for all the regions, zoned into northern, middle and southern sectors.

Ms Ansong said the risk of contracting Ebola and similar diseases was not temporary and that Ghana, with no recorded case of Ebola so far, was not out of danger.

She said besides regular washing of hands under flowing water, dead bodies must be handled by only those trained to handle them and that early treatment must be sought if symptoms of Ebola occur.

Ms Ansong said males who contract Ebola and recovered were at risk of passing on the virus to their sex mates through semen within seven weeks of being declared fit.

She said an ambulance team had been trained for ferrying Ebola patients.

Mrs Annan said an active surveillance drill had been adopted, which would ensure that a patient was tracked to trace and handle all people that patient had been in contact with.