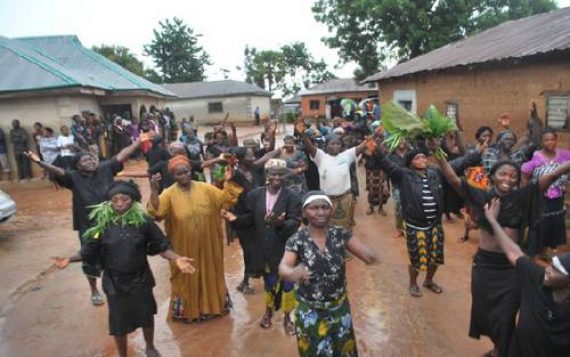 Clad in black attires the widows marched through a major highway in Kamazo area and also went to the house of the village head and the houses of other titled chiefs to express their displeasure over Police raid on Florence Emmanuel’s house at 2:00am to arrest her son and daughter in-law over an unfounded allegation, thereby torturing her and stripping her (Florence Emmanuel) naked in the process. Trouble began when the youths of Kamazo area protested peacefully last week for the incessant power outage in the area and demanded explanation from their leader, Donald (Sarkin Samari), whom they said for some years has been collecting N5,000 (Five Thousand) and above from houses and households to pursue power stability and facilitate the procurement/supply of transformers to the area by the government/power distribution company.

After the protest, a source said, Donald then waylaid some of the youths who organized the protests and beat them up, thereby causing the youths to reorganize and then pelted his house.

“Later that night, at about 2:00am several Policemen directed by Donald then stormed Florence Emmanuel’s house in some vehicles to arrest her son and his wife, saying they were part of the people that pelted Donald’s house. The Police were in mufti and did not identify themselves. Some of them were even drunk. So, Florence then demanded explanation for their mission and to know who they were. But rather than explaining, they pounced on her and beat her mercilessly and even naked her, she had to pull her curtain to cover her nakedness.

“They even used their stick popularly known as ‘Talk True’ on her and it got broken. The Police having brutalized her went away with her son and his wife. In the morning we all ran there and advised her go to the hospital, but she said she wanted to know where her son and his wife have been taken to. She later found them at Sabon-Tasha Police Station. Upon siting her that morning in their station, the Police arrested her as well. And as we speak, she is still in detention. We have the broken part of their stick to show the world what they Police did to our colleague,” the source said.

Another Widow questioned the rationale behind keeping Florence Emmanuel in custody for over five days now as against the stipulated time of keeping any offender or suspect in custody for interrogation, adding that Florence had six children and three grandchildren who have been suffering and starving since her arrest.

The source vowed that the widows would do all it takes to ensure justice is done and the police are brought to book, noting that the media, human right groups and the government will be called upon to intervene.

In his reaction, the Kaduna Police Public Relations Officer, Deputy Superintendent of Police (DSP) Zubairu Abubakar confirmed the incident, saying that Florence Emmanuel’s son was among the youths numbering about 14 who went to Donald’s house to destroy his properties because they suspected him of conniving with previous power distribution company to deny them transformers.

The Police spokesman said Florence Emmanuel was arrested the next morning when she brought food for her son because she obstructed the Police when they came to arrest her son and struck one of them with a shovel in the process.

She ran away that night and could not be arrested. It was in the morning that one of our men recognized her as the person who struck the police with a shovel. Florence Emmanuel has already confessed to hitting the Police in her statement, DSP Abubakar added.

Police Cautions Public Against Use Of Thugs In Settling Business Transactions