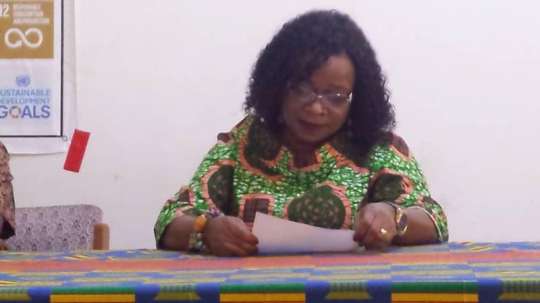 Traditional authorities in Ghana have been urged to modernize puberty rites since they give room for the abuse of girls in their present forms.

Marking the United Nation’s International Women’s Day (IWD) day over the weekend,Dr Charity Binka, Executive Director of Women, Media and Change (WOMEC) who called for the modernization, asked why girls were made to show their breasts to the public in the name of performing puberty rites after confinement.

Dr Binka stressed that, “I don’t think that any young person, girl or teenager if not because in the name of puberty rites would like to parade herself in public showing her breasts to the whole world but we are doing this because we said it is a culture”.

Speaking at a mentoring session organized by her outfit to commemorate the IWD’s with female students of the Ashaiman Senior High School she indicated that “we need to find ways to modernize them because these puberty rights can be modernized, if it is to train the children to become well behaved and not abused, we can do it in many ways, I don’t believe that if you want to train a child it must be done through showcasing of breast and marrying her off at that age”.

She said such practices contributed greatly to childhood and early marriage even though they were doing their best to stop such marriages and called for a discourse on the need to modernize puberty rites.

“Now we are hearing that because people are resisting it, they are now doing it for little girls of two, three years, what at all are you going to train those little girls in, ” she added.

Touching on the mentoring programme, she noted that it was part of activities to mark the IWD which was on theme:“I am Generation Equality: Realizing Women’s Right” which was aligned with the UN Women’s new multigenerational campaign of “Generation Equality”.

She indicated that for some years now they commemorated the programme in Accra but decided to send it to a little remote area therefore their decision to interact and encourage girls to aim high and achieve their future goals.

The programme saw Mrs Esi Benewa Otoo, a Senior Broadcast Journalist at TV3 speaking on “how to be an effective career woman” while Miss Abigail Oppong, an ICT Specialist, educated the girls on appropriate use of social media tools for self-empowerment.

Dr James Clayman, an Obstetrician and Gynecologist, on his part, took the students through gender-based violence and adolescent reproductive health.