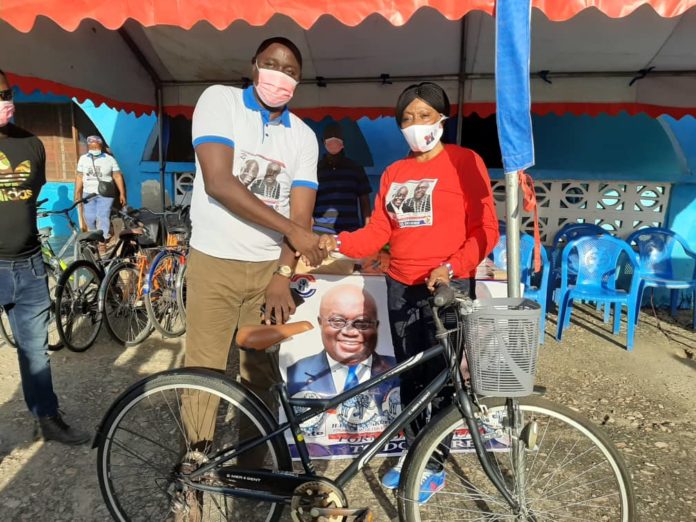 A former Member of Parliament (MP) for the Builsa North Constituency in the Upper East Region, Mrs Agnes Asangalisa Chigabatia, says women are influential and play vital roles in the political landscape.

She said the involvement of women in all spheres of life, especially politics, added value and had the ability to convince and pull multitudes along their vision.

Speaking in an interview with the Ghana News Agency at the launch of a women group dubbed “Chiga Ladies for Nana and Abakisi” at Chuchuliga to help canvass for votes for the NPP in the 2020 elections, Mrs Chigabatia said “We cannot do without the support of women.”

She indicated that the about 200 women group would visit “Every nook and cranny of the Constituency and preach the good message of the NPP to every household. We have a message, and it must get down to every Constituent in this election.”

Mrs Chigabatia as part of the launch, also presented eight bicycles, Party posters, face masks, branded “Chiga Ladies for Nana and Abakisi” T-shirts with photos of President Akufo-Addo and Mr James Maurice Abakisi, the Parliamentary Candidate (PC) on them to the Party.

Since the start of the Party’s campaigns towards the Presidential and Parliamentary elections, the former MP, who is also a former Deputy Upper East Regional Minister made several donations to support the NPP in the Constituency to remain in government, and capture the Builsa North seat from the NDC.

According to her, the NPP must win the elections to continue with its “Life changing policies” such as the ‘Planting for Food and Jobs,’ the Free Senior High School (Free-SHS), ‘One Village, One Factory’ among others.

The ladies, clad in their T-shirts and with NPP paraphernalia, danced to NPP songs blasting from huge speakers mounted on tricycles and moved around the Chuchuliga community to draw attention of members of the public to the newly inaugurated group.

Prior to the launch of the support group, Mrs Chigabatia in the company of the PC, called on the Nab Francis Akanbegmi Asangalisa II, the Chief of Chuchuliga to inform him about the newly launched group.

Nab Asangalisa II thanked them for the visit, appealed to the PC to ensure that if the Party was voted back to serve a second term, and if he wins the nod to represent the people of the Builsa North in Parliament, Mrs Chigabatia should be recognised.

Mr Abakisi in response said the concern of the Chief was noted and would be communicated to the top hierarchy of the Party for redress, and also expressed gratitude to the former MP for her unflinching support to the Party since she left office as Deputy Regional Minister and MP.