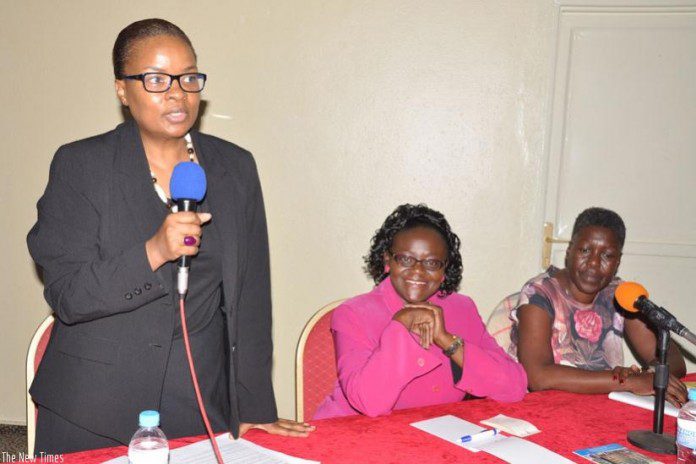 Dr Dludlu addresses participants at the sympossium for women living with HIV in Kigali on Wednesday as Anyangwe (C) and Onyango look on. (Sharon Kantengwa)

Speaking at a workshop and launch of PAPWC Rwanda Chapter in Kigali, Onyango said by joining efforts with other African countries, organisations and stakeholders, Rwanda would be able to meet the target of having an HIV-free continent by 2030.

The forum, that ended on Wednesday in Kigali, was organised by Rwanda Women Living with HIV/AIDS in partnership with Ministry of Health, UNAIDS and UN Women.

“The issues of women living with HIV in Africa are different from women living in the West. As a network we cannot work in isolation without bringing in other countries,” Onyango said.

“People are still dying from AIDS-related diseases because of stigma and so we want to work with all the organisations in place so that we can cover a bigger picture so that by 2030, we will have an HIV/AIDS-free Africa.”

Talking about global efforts to advance the Fast Track agenda, Dr Sibongile Dludlu, the country director of UNAIDS, said Rwanda had joined other countries in setting targets to fast track ending HIV/AIDS as a public health threat by 2030.

“Rwanda has amazingly achieved a lot.  More than 90 per cent of people living with HIV in Rwanda now know their sero status and those in need of treatment are getting it. Mother-to-child transmission rates has been kept below 2 per cent in some sites,” she said.

Clara Anyangwe, the country representative of UN Women, reiterated the importance of unity and networking, as one of the policies that could help combat HIV/AIDS in Rwanda.

“We believe that women living with HIV have the right to network and access information that is related to their health and lives in general,” Anyangwe said.

“Networking has proven to be a major way of addressing different issues in other domains. It can also help women living with HIV to overcome isolation and other related problems that are difficult to solve individually.”

Since the creation of the Network of People Living with HIV in Rwanda, members have contributed significantly to grassroots education and supported treatment adherence.

“We are thankful to Rwanda’s leadership for the involvement of People Living with HIV and, particularly women, in this journey towards ending AIDS epidemic, we will never give up until we get there,” a participant said.

Dr Placidie Mugwaneza, the head of HIV prevention at the Rwanda Biomedical Centre, said women are fundamental in decision making and pledged to involve them in key sectors concerning people living with HIV.

“Addressing HIV is a priority for the wellbeing of the Rwandan population and ministry of health acknowledges the role that women should play in the fight against HIV,” Dr Mugwaneza said.

“Without this existing network, the ministry of health cannot work alone. The Ministry of Health has a commitment to ensure that women are consulted in decision-making and be informed on what is happening in regard to HIV response.”

The workshop aimed at building capacity of women at district level on engagement in participation and leadership of women living with HIV.

It resolved to reinforce communication on HIV/AIDS, dender-based violence, sexual reproductive health and reinforce the socio-economic capacity of Rwandan women and young people living with HIV in general.

The PAPWC Rwanda Chapter is expected to improve the quality of health, gender-related issues, sexual and reproductive health rights, and HIV/AIDS services for the organisation’s members.