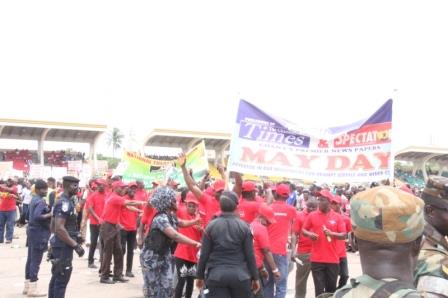 However, thousands of workers in the Region defied the heavy rain and went on a procession through the streets of Cape Coast. 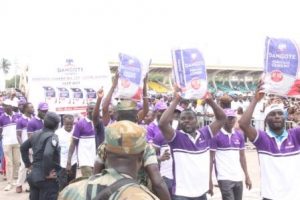 It was attended by a cross–section of the public and government officials and members of the Trades Union Congress (TUC).

The theme for the celebration was: “Ghana at 60: Mobilising for Ghana’s future through the creation of decent jobs”.

Mr Kwamena Duncan, the Regional Minister, applauded the TUC for the massive participation and pledged Government’s readiness to work with organised labour to address the numerous labour related issues.

He urged the workers to upgrade their capacity in Information Communication Technology (ICT) to keep up with the changing world of ICT and also to ensure the survival of their work.

Mr Duncan said there is the need for workers to be concerned about health and safety at their respective work places and work harder than before to increase production.

He called on workers to embrace the prevailing job creation policies and support Government as it seeks to deliver its mandate of improving the living conditions of all Ghanaians.

Mr Duncan also called on the workers to support the fight against galamsey to save the country’s water bodies and other natural resources.

He said organised labour would also support Government to undertake an audit of all government funded projects and programmes.

Mr Doughan said Ghana, after 60 years of independence has failed in its economic management as unemployment continues to be a great challenge facing the country in spite of its enormous wealth.

He called on the Government to engage organised labour on all issues affecting the working population adding that,” we believe we can achieve a lot together through social dialogue”.

Twenty-six hard working and outstanding workers in the Region were honoured for their various roles.
GNA /www.newsghana.com.gh