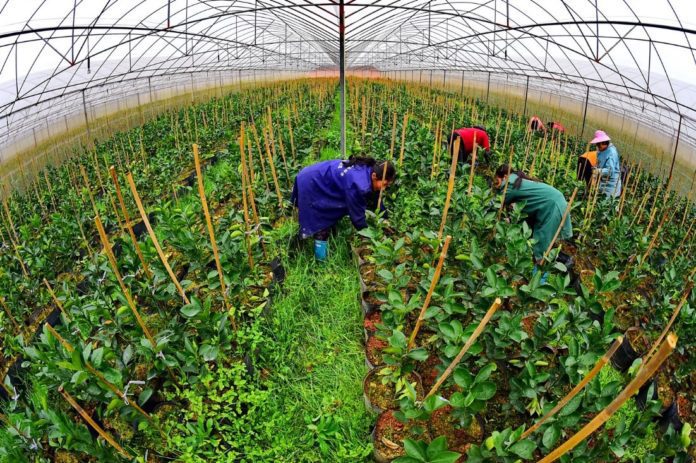 Ablikim Mamatim holds a drawing board as he sits on the edge of his wide brick bed. His 4-year-old grandson sits beside him, sucking his thumb and fumbling with a plastic toy in his other hand.

The grandpa and the boy stare at images of the Swiss alpine region from a nature documentary on an old TV set in the living room.

When Mamatim looks away from the TV and starts to draw on the board, one might mistake him for a well-trained artist.

Mamatim lives in the Kumerik Village of Hotan in Xinjiang Uygur Autonomous Region. At the age of 75, he has an almost photographic memory.

As a renowned self-taught artist in his hometown Moyu County, he has produced more than 15,000 works in the past 60 years.

“When I was 15 years old, I went to a bazaar, and one of the vendors was selling a Mukam oil painting. I really liked the picture. It was so beautiful,” Mamatim said.

Mukam is a traditional type of art that depicts people singing, dancing and playing folk instruments. The painting that inspired his persistent pursuit of art was probably a knockoff, judging from how cheap it was.

“My family was very poor, but after I saw that painting, I had a strong urge to draw and paint,” he said.

Sixty years ago, his parents, who made a living making bark papers, could not afford the luxury of sending him to an art school. Mamatim managed to find a drawing book and started to teach himself.

Intrigued by the coloring and texture of oil paintings, Mamatim started to paint with reed straws. He did not know where to buy a brush. Without pigments, he made paints using ashes from iron pans and blended them with ground colored stones he picked up from the mountains.

He draws inspiration from his living environment and paints everything that pleases him — the popular trees, the Gobi desert and ripe melons. Another important source of inspiration for his art is TV shows. Mainly a landscape painter, he also experiments with subjects such as Greek mythology.

In 2012, he sent an oil painting on Venus to a nationwide farmer painter competition and placed second.

Over the years, Mamatim has developed his own style. He is skilled at using fine sand on oil paintings to highlight the raw nature and add coarseness.

Mamatim never expected too much from his paintings, though a single painting fetches 12,000 yuan (1,790 U.S. dollars).

Now his elder son Ablipiz manages a studio and sells his father’s paintings to restaurants, galleries and private collections. Ablipiz also buys high-quality pigment and brushes from Urumqi for his father.

So far, Mamatim has tutored 1,500 students and trained 30 professional artists. Mamatserim Rehman, a local art teacher, is studying his approach to painting.

“Mamatim has a special understanding of painting. He is passionate about life, and he shows it in his works,” he said.

He paints almost every day, and he can finish a small painting within a day or two. On a warm spring day, he would sit on a stool in his yard and work on his paintings, while his wife sprinkles grain on the ground to feed their ducks.

Mamatim still finds time to plant chest trees, feed his lambs and help his wife with the chores.

“I’ve always loved painting. It brings me endless fun. I hope more people will learn to draw,” he says. Enditem