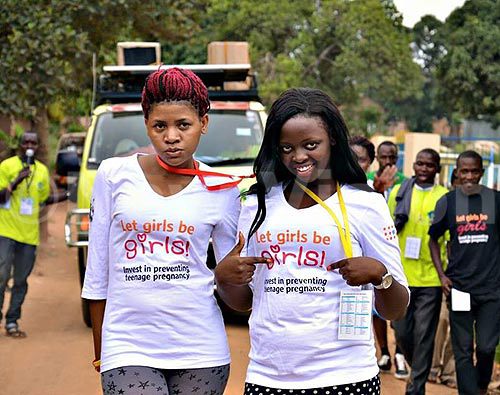 Youth leaders Silvana Osoro and Dishon Mulinge address the media on Wednesday. They said they would mobilise other youths to demonstrate if the Government does not take action on the massive wastage reported by the Auditor General. PHOTO: JENIPHER WACHIE/ STANDARD

Some of the debts indicated in the audit report released by Auditor General Edward Ouko date back to 1979.

The audit review for the 2013-2014 financial year further revealed that total debts reflected in the consolidated statement of outstanding loans stood at Sh192 billion as at June 30, 2014.

Topping the list of the 21 State owned companies is the Local Government Loans Authority with a staggering Sh7.5billion debt.

According to the report, the National Water Corporation and Pipeline Corporation owes the Government Sh2.4 billion.

Another notable organisation that has failed to remit repayment to the Treasury is the Rift Valley Water Services Board with a debt of Sh1.4 billion. The board has been undertaking multi-billion shilling projects including the massive Sh5 billion Chemususu Dam project in Baringo County. It is also scheduled to carry out the Sh34 billion Itare Dam project in Nakuru County, with the assistance of the Italian Government.

Eldoret Municipal Council, which is now under Uasin Gishu County, has the fourth largest inactive debt after it was unable to repay Sh1 billion incurred in 1993.

Nakuru-based Pyrethrum Board of Kenya- now renamed the Pyrethrum and Other Industrial Crops Directorate- that has been struggling over the years has failed to repay a loan of Sh863 million it received in 2008.

Kenya Coffee Board and Kenya Power are unable to repay Sh560 million and Sh389 million respectively.

Ouko said no reasons have been provided for failure by the institutions to remit their loan repayments to Treasury.

By Steve Mkawale, The Standard

Tanzania reiterates appeal for cancellation of debts amid COVID-19

Russia, Africa and the Debts