Two persons who were said to have dishonestly received stolen items from three suspected robbers were on Wednesday granted bail by the Accra Circuit Court presided over by Mr Aboagye Tandoh. 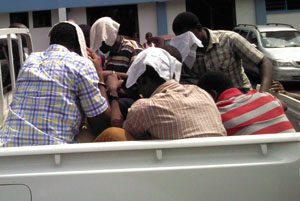 Benjamin Aidoo, Trader and Kwame Tawiah Goldsmith were granted bail in the sum of GHC 2,000 each with two sureties who should be people engaged in gainful employment. They could be doing private business or be public servants and their place of work should be identifiable.

They pleaded not guilty to the charges.

The other accomplices are Kwame Konadu, Trader, Abdulai Rashid, Driver and Emmanuel Darko, unemployed, were said to have conspired and robbed three persons including an Assistant Commissioner of Police.

They also pleaded not guilty to the charges but were remanded by the court to reappear on February 22 for trial.

Earlier, Prosecuting Chief Superintendent of Police Duuti Tuaraka told the court that the complainant in the case is an Assistant Commissioner of Police.

He said on November 1 2016, at about 0330 hours, the complainant and her family were asleep when Konadu, Rashid and Emmanuel scaled the fenced wall and entered their compound.

He said the accused persons forced opened the sliding door of the ground floor and entered the house.

“They met three young men in the complainant’s family, who were fast asleep in their room and attacked them, subjected them to severe beating and later tied them up and finally locked them in their bathroom.

The Prosecution said Kwame, Rashid and Emmanuel moved to up-stairs of the house and attacked the complainant, subjected her to severe beatings together with her husband.

Chief Supt Tuaraka said the accused persons tied the husband of the complainant and robbed them of their Acer computer, jewelleries, tablet, iphones, Samsung phones, police Gota and Cash, the sum of GHC740, 200 Euros and their wedding rings.

He said the accused persons took the items to Kofi Kwei a suburb at Pokuase and sold same to Benjamin.

A complaint was lodged and investigation led to the arrest of Benjamin with the Acer laptop, two iphones, tablet, Samsung phones, two ipads and Police Gota.

He said Benjamin mentioned Kwame, Rashid and Emmanuel as those who sold the items to him and they were arrested.

Benjamin led the Police to Kaneshie, where they sold the complainant’s gold wedding ring to the Goldsmith, Kwame at the cost of GHC580 and he was arrested.

In his caution statement, Kwame told the police that he had melted the ring and used same to make another ring for a customer.
GNA