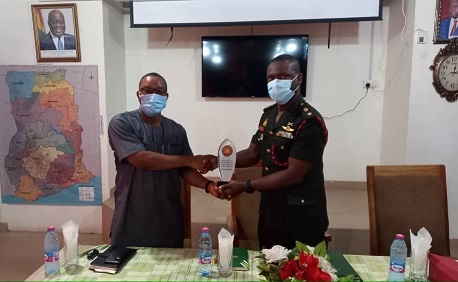 Lt Col Edward Sarpong Appiah, Commanding Officer of the 66 Artillery Regiment in Ho, has sealed the longstanding relationship between the Unit and the Ghana Journalists Association (GJA) Volta Chapter with a plaque.

The plaque, he said, symbolised the strengthening of the existing cordial relationship between the ‘Home of Gunners’ and the journalists, to serve the best interest of the people in Volta and Oti Regions.

The Commanding Officer who said this when he hosted executives of the GJA-Volta and some senior practitioners at the barracks for a session, emphasised the role of the media in maintaining peace in both regions saying, “we need each other”.

“Your role in securing the peace in Volta and Oti Regions is crucial to be overlooked,” he said and assured that “personally, my doors are always open” to engage the media to help project the good image of the Regiment, the Armed Forces and the country at large.

Lt Col Appiah entreated the journalists to direct their paths and draw the attention of the Unit to shortcomings of staff for the needed action for “we’re humans” capable of going astray.

Major Felix Opoku, Commander Rear of the Regiment, alluded to the proverbial “until the lion learns how to write his own story, the tale of the hunt will always glorify the hunter” to emphasise the importance of the military-media relationship and urged practitioners not to dwell on only the negatives, but also “help bring out our good things”.

Mr A. B. Kafui Kanyi, Volta and Oti Regional Chairman, GJA, said the relationship between the two entities had over the years grown to almost “a love affair” and promised of the Association’s resolve to maintain it in the interest of society.